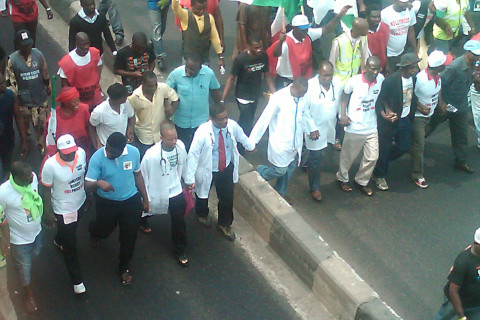 Regardless of the Consultants opting out of nationwide strike by Doctors in the public hospitals, delegates under the umbrella body – Nigerian Medical Association (NMA), are currently meeting for an Emergency Delegates Meeting in Abuja, to review their demands and negotiations with the Federal Government.

According to a delegate, the meeting was called to appraise the outcome of the July 3 meeting that was held in Abuja between members of the NMA’s National Executive Council, the Secretary to the Government of the Federation, the Minister of health and other top officials in the Federal Ministry of Health.

The source stated that the outcome of the meeting would determine whether the nationwide strike, which is in its second week, would be suspended.

He said, “We can’t call off the strike without the congress meeting. That is where we are going to decide whether or not we are satisfied with whatever agreement the executives have reached with the Federal Government. We will appraise what is on offer vis-a-vis our demands. Then we will take the stand of the house back to the government for further negotiation.

“Many of the issues raised in the letter we wrote to the Secretary General of the Federation have not been addressed and it seems that they are playing politics with a very delicate situation that may cause anarchy and division in the health sector. It was a surprise when we read in the news that the Federal government said it had reached an agreement with us.”

The NMA, in a 24-point demand letter to the Federal Government in June, directed that either such positions be reversed or doctors would embark on a total nationwide strike. The body thereby gave a week ultimatum, which lapsed last week, culminating in Doctors in federal and state-owned hospitals embarking on a nationwide strike from last Tuesday, July 1 over issues relating to appointments of officers into choice positions in the nation’s public health institutions.

The industrial action had since brought to halt activities in the public health establishments across the country.