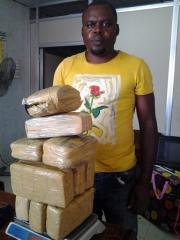 Officials of the National Drug Law Enforcement Agency (NDLEA), at the Murtala Muhammed International Airport (MMIA), Lagos have arrested a trader with 9.375kg of compressed cannabis hidden inside foodstuff.

The suspect was apprehended while attempting to board an Ethiopian Airline flight to China where, a country where drug trafficking attracts capital punishment.

Chairman/Chief Executive of the NDLEA, Ahmadu Giade, said that he is happy that the arrest took place here in Nigeria, thus preventing the suspect from possible death sentence in China.

“The Agency will continue to sensitise members of the public on the dangers of drug trafficking and abuse. This arrest is timely as it saved the life of the suspect and prevented the image of our country from being smeared” Giade stated.

The NDLEA boss however dismissed the suspect’s claim of financial difficulty stressing that somebody who could afford a return ticket, buy drug worth one hundred thousand naira with basic travel allowance could have conveniently settled his rent.

According to Hamza, “officers detected the drug when the suspect, Izuchukwu Jude Ekwosimba came to check in his luggage on his way to China. The cannabis was concealed in dried fish, dried bitter leaf, crayfish, melon and other local food spices. The weight of the cannabis is 9.375kg.”

The 38-year-old trader who is married with a child said that he was under pressure to pay his rent.

According to Izuchukwu’s confessional statement, “I sell clothes at Lagos Island and I live at Ikotun, Lagos with my wife and child. My business was doing well until I was duped the sum of five million naira. Since then, I have been living from hand to mouth. My greatest challenge now is the payment of my house rent and that of my shop. I bought the hemp for N104,000 naira and I learnt that I could sell it for 9,000 dollars in China. I had no other source of getting the money that was the reason why I decided to smuggle drugs”.

The suspect who hail from Anambra State will soon be charged to court.