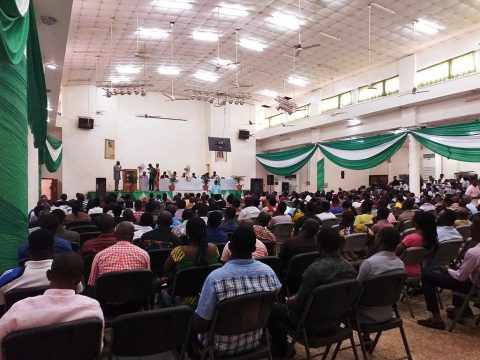 The conference, however, dropped its initial theme, “Witchcraft: Meanings, Factors and Practices.” following a directive from the authorities of the university and public outcry in the social media over the choice of the topic.

In a remark, the Director of the centre, Prof. Egodi Uchendu, said that the casualty caused by social media and other platforms were engineered by people who set out to cause confusion on ordinary academic conference.

“The casualty of this confusion went beyond being asked by UNN management to change the title but also the withdrawal of our keynote speaker, Prof. David Ker, 48 hours to the conference.

“I am delighted that social media hype on the conference didn’t deter participants and organisers from attending the conference, which is completely academic,” Uchendu said.

Prof. Damian Opata, in his paper entitled, “The wealthy are no witches: Toward an epistemology and ideology of witchcraft among the Igbos of Nigeria,” said that people’s misconception about witchcraft inhibited the development of knowledge on the phenomenon.

According to him, “the manner in which witchcraft is propagated and believed by some Nigerians has continued to kill the development of knowledge on the issue.

“Some people have killed the initiative for creative indigenous thinking because of mere belief in witchcraft.”Apata, who is a senior lecturer in the Department of English and Literary Studies, said that diviners and seers in the indigenous traditions many a time believed that witchcraft was the source of the problems of many people, who consult them.

He said: “Pastors, prophets, seers in foreign religions, charismatic priests of variegated persuasions very frequently use perceived attacks by witches and wizards to put fear in the minds and hearts of their various congregations.

He said, “What we are doing today is completely an academic conference, it is unfortunate that some people tried in social media to give it different interpretations.”

He said that “the fact that opening prayer of the conference was conducted by a Catholic priest, the moderator of the event is a priest from Anglican Church and music was provided by UNN Christ Chapel Church choir, were an indication that there was nothing evil about the conference.”

Also, Prof. Peter-Jazzy Eze, the Head of Department, Sociology and Anthropology, spoke on what he entitled, “Which witch? What Anthropology knows of the Adult Bugbear.”

Eze said that “witchcraft does not exist but only exists in the mind of the people who believe in it.

“Science and technology have overtaken the superstitious believe of witchcraft, which has no practical proof.

“Africa should drop the believe of witchcraft and embrace robust knowledge in science and technology that is very practical and verifiable.

“If Africans can fully embrace science and technology, in the next 50 years, there will be nothing like superstitious belief in witchcraft.”