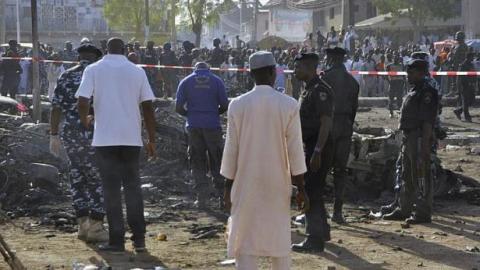 It was again a sad Friday for many Muslim faithful in Kano, who had thronged to observe the weekly congregation prayer (Jumah) as many feared killed in a fatal eruption at the city’s Central Mosque.

The explosion, our Correspondent’s sources indicated occurred around 2. 30pm at the time the worshippers were inside the mosque, listening to sermon, prior to the two Rakat prayer in the ancient mosque, which is around the Emir of Kano palace.

Sources said the deafening sound of the bomb triggered pandemonium and stampede within and around the mosque as worshippers scampered to safety.

Though police said they are stealing counting the number of those who lost their lives in the blast but witnesses say number of deaths would be over 200 people.

“We are still taking stock and official figure will be made available soon as it is ready.” said the acting Kano state Police Public Relations Officer, Mr Mustapha Abubakar.

The Kano Central Mosque is one of the largest mosques in the city and is the mosque where emir of kano normally uses to observe prayers.

Meanwhile, Our correspondent reports that the bomb blast triggered protest in the city as youths took to the street to protest the late arrival of the police and other security agencies at the scene.