Use of Force Against Boko Haram Counter Productive, Says Fayemi 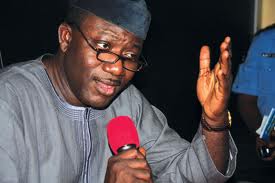 Ekiti State Governor Kayode Fayemi has described as counterproductive the exclusive use of force in tackling the Boko Haram insurgence in the north eastern part of the country, saying such steps cannot solve the problems of terrorism bedeviling the region.

He disclosed this on Thursday while delivering a paper titled: “Strategies for the Transformation of the Security Sector in Nigeria” held at the National Institute for Policy and Strategic Studies (NIPSS) Kuru in Jos South Local Government Area of Plateau State.

According to him, “We need a multi-dimensional strategy that does not necessarily discount the use of force but does not also exclusively focus on it, but uses diplomatic and economic means.

Fayemi called for the need to check crisis fuelling agents such as the use of drugs and proliferation of small arms into the country.

He stressed that, If this is not checked, the 10.5 million children out of school in Nigeria will become susceptible.

On the issue of state policing the governor noted that the nation being a complex country requires solutions at various levels, a task which could be handled through multi-level policing.

According to him, “The Police are only Federal in name because the government at the State level procures vehicles, uniforms, they give allowances and in some states they even procure ammunition for the police.

While agreeing that there are legitimate fears by those who believe that governors will use state police to oppress the people he said “The reality today is that isn’t that what is happening at the federal level? Isn’t the federal government using the police to harass and intimidate those perceived to be enemies of the state? He asked.