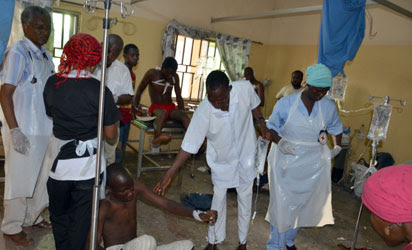 The Victims Support Fund (VSF) set up to assist victims of terror attacks and others, said it has donated over N170 millions to hospitals handling victims in the North-East, Abuja and Plateau State.

This was disclosed by General Theophilus Danjuma, while presenting a cheque of N20 million to the Jos University Teaching Hospital (JUTH), in Jos, the Plateau State capital.

General Danjuma who was represented by the Executive Director of VSF, Prof. Sunday Ochoche, said, “We are here to show our solidarity to JUTH, to commend you on the great work you’ve been doing in supporting the victims of insurgency.

Ochoche noted: “Jos has suffered considerable attacks from the insurgents; these attacks don’t give notice and you have demonstrated by the quality and nature of response that you are equal to the calling for the profession to which you have all come into”.

He explained that the VSF Committee was set up by the immediate past President Good luck Jonathan, Chaired by General Danjuma (rted), but the VSF itself was not government owned, but “a private sector led partnership with the government to support the victims of insurgency”.

He added that, they were in JUTH to continue with the implementation of the mandate of the committee.

The Executive Director, acknowledged “We got to realize, I will admit a bit late the crisis number of the medical institutions were facing, in administering support to the victims of insurgency.

“At the beginning, this was not really within our scope of work at all, but as we got to know the challenges many of the institutions were facing, we had to step back and begin to address some of these critical issues and we have so far supported a number of hospitals in the North-East and recently in Abuja with so far over N140 million.

“So we are here for two main related things, one to sign a Memorandum of Understanding between the VSF and JUTH, the MoU is the one that were have both worked on, they have agreed on the terms and we want to assure Nigerians that we agreed on very stringent conditions to ensure that the funds been given to the hospital are delivered strictly for the purposes for which they are been given.

“That leads me to the second component, which is to deliver the support of N20 million JUTH.

He said the VSF and JUTH will work together to ensure that the funds are judiciously used.

However, Prof. Ochoche advised that people should not be allowed to die because of N40, 000, saying that the funds donated should be used to assist such patients.

Responding, the Chief Medical Director of JUTH, Prof. Edmund Banwat, said, “We assure you we will channel the funds specifically for the purpose it is meant for.

The sum of N10 Million was also donated by VSF to the Plateau State Specialist Hospital.