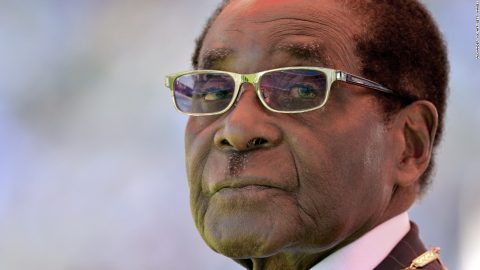 (AFRICAN EXAMINER) – Since Wednesday he and his wife have been put under house arrest due to Military takeover, Zimbabwe’s President Robert Mugabe Friday made his first public appearance.

Mugabe amidst the top government functionaries was seen attending a graduation ceremony in the capital, Harare.

The military confirmed Friday it was “engaging” with Mr. Mugabe and would advise the public on the outcome of talks “as soon as possible”.

Mr. Mugabe walked slowly up a red carpet and joined the crowd in singing the national anthem, then opened the graduation ceremony at Zimbabwe’s Open University, where he is chancellor

Neither the 93-year-old President’s wife, Grace Mugabe, nor Education Minister Jonathan Moyo – an ally of Mugabe’s wife whose house was reportedly raided by the military were present at the function.

The army’s action followed Mr Mugabe sacking of Vice-President Emmanuel Mnangagwa last week. Mr Mnangagwa is considered as a potential successor and his dismissal paved the way for Mugabe’s wife Grace – who is four decades younger than him – to take over the Presidency after husband.