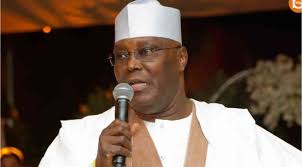 (AFRICAN EXAMINER) – Against the expectation of many, a former Vice President VP and Presidential candidate of the opposition Peoples Democratic Party (PDP), Atiku Abubakar, Thursday visited his ex-boss, former President Olusegun Obasanjo in Abeokuta and had a closed-door meeting with him.

Expectedly, the closed-door meeting focused on seeking the support of the former President for his (Atiku’s) candidature and the PDP.

Obasanjo and Atiku were both President and VP respectively between 1999 and 2007.

Atiku was joined during the visit by some PDP Chieftains including its National Chairman, Prince Uche Secondus; his campaign Director and former Governor of Ogun State,  Otunba Gbenga Daniel;  Senator Ben Murray-Bruce; the immediate past Governor of Cross River State Liyel Imoke, among other party’s chiefs.

It would be recalled that Obasanjo’s coalition has since fused into the African Democratic Party (ADC), a political party which has overtime joined the PDP led Coalitions of Political party CUPP).

Ironically, the former Head of State has recently declared that ‘‘his God will not forgive him’’ if he supports Atiku’s Presidential ambition.

Some leaders of the Yoruba socio-cultural group, Afenifere, had Tuesday this week visited Obasanjo, allegedly to finalize with him on who to support between Atiku and incumbent President Muhammadu Buhari.

The Spokesman of the group, Yinka Odumakin told newsmen after the meeting that the group would soon announce the candidate and the party it would support in the 2019 general elections.