Anambra Prostitutes Clash With Government Officials Over  Demolition Of Brothels 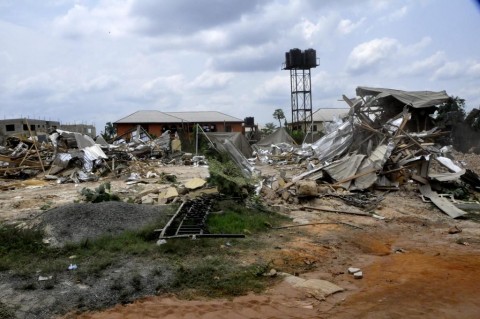 By IGNATIUS OKPARA, Awka – Anambra state government at the weekend rendered more than 2000 commercial sex workers, popularly known as (Ashewo)  homeless, as the State Urban Development Board (ASUDEB) demolished over 50 brothels where the prostitutes live and do their business.

The demolition exercise, which took place mostly at the popular cattle market, Amansea, in Awka North Council Area of the State, almost suffered a setback as the prostitutesnrevolted against the action which they described as “unfair”

Our Correspondent reports that the State Urban Development Board rounded up the place  with over 50 armed policemen, before pulling down the brothels, which the government, alleged  were being used as hideout by kidnappers.

Angered by the development, the prostitutes quickly mobilised themselves and started raining curses on the state governor,  Willy Obiano, whom they claimed did not give them any pre-notice before embarking on the demolition exercise.

Spokesperson for the prostitutes, who craved anonymity, said “the government officials are wicked and inhuman for destroying our brothel without notice.”

Speaking with newsmen at the end of the exercise, General Manager, Anambra State Urban Development Board, Mr. Enemmuo Nathan Chinedu, who led the operation, explained that the exercise was part of Governor Willie Obiano’s resolve to rid the state all of crimes and criminality.

He added that the structures demolished were illegal buildings in Amansea Garriki where prostitutes, kidnappers and armed robbers reside.

Chinedu disclosed that similar demolitions will be extended to other cities in the state such as, Nnewi, Onitsha, among others, where brothels and illegal structures are situated, until all prostitutes in the state relocate.

The ASUDEB) boss however, debunked the allegation of not giving them prior notice, saying that three weeks notice was handed down to the prostitutes to vacate the vicinity before the operation.

“A lot of prostitutes live around Amansea cattle market, spoiling our children and constituting a nuisance in the area; and you know that anywhere there is brothel, criminals and kidnappers hover around there.

“In my capacity as the ASUDEB GM, I will ensure that this doesn’t exist anymore in the state; and our activities are in line with our amiable governor’s policy on zero-tolerance to criminals and kidnappers in the State,” he said.

The prostitutes were latter sighted boarding taxis to Ugwuoba in Oji River council area of Enugu State, where they reportedly operate in another brothel.