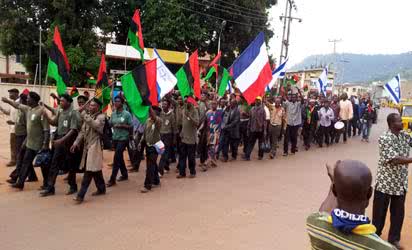 Dozens of members of the Nnamdi Kanu, led Indigenous People of Biafra, IPOB, on sunday shut down Enugu city, as they virtually took over major roads in the metropolis.

They were protesting the continued detention of Kanu, who is also the Director of radio Biafra, by operatives of the department of State Security Services, DSS

The Protesters were chanting anti-Federal government slogans,  declaring their opposition to the incarceration of the IPOB leader.

Although, they were peaceful, as commuters and passers-by were allowed to ply without any form of confrontation.

They said that they would not relent in their agitation for the actualization of the State of Biafra.

However, some residents, who were returning from different Churches in parts of the city also joined the protest march raising their Bibles and chanting “Anyi amakwe” meaning “We will not agree.”

The IPOB, had matched through areas as Ogui, New Haven, Agbani , Coal camp roads, among others

Meanwhile, at Agbani road in Enugu South local government Council, it was a no go area, as Soldiers barricaded the major road along the Awkunanaw Barracks.

For fear of uncertainty, heavily armed security operatives, were seen driving behind the protesters.