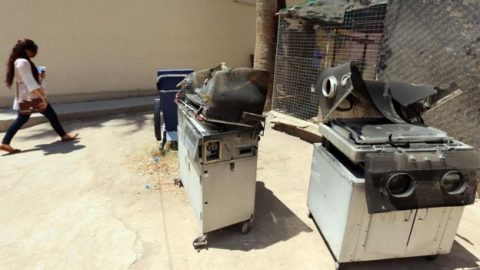 BALTIMORE, MD (AFRICAN EXAMINER) – No fewer than 12 premature babies have been confirmed dead in a fire incident which occurred at a hospital in Baghdad, the Iraqi capital.
Following the sad development, officials confirmed that eight other children and 29 women have been moved from the affected unit and transferred to nearby hospitals.

The Health Ministry speculated that the fire might be caused by an electrical fault, as electrical fires are common in Iraq due to shoddy maintenance and poor wiring, as well as lack of fire escapes.
The factors always cause high causalities.

It took the fire officials three hours to put out the blaze, which was said to have erupted overnight inside the maternity unit of Yarmouk Hospital, in the western Baghdad.

While confirming, an adviser to the Health Ministry, Dr Amir al-Mukhtar, said there had been 20 babies inside the maternity unit when the fire erupted around midnight.
Dr. Mukhtar indicated further that the blaze spread very quickly and wrecked a lot of havocs.

A source from the Health Ministry hinted that 19 of the children and women who survived needed treatment for burns and smoke inhalation.

Relatives of the victims were seen Wednesday morning outside the hospital. Among them was one Shaimaa Hassan, 36, who lost her two-day-old son.

She lamented “I waited for ages to have this baby and when I finally had him, it took only a second to lose him”.