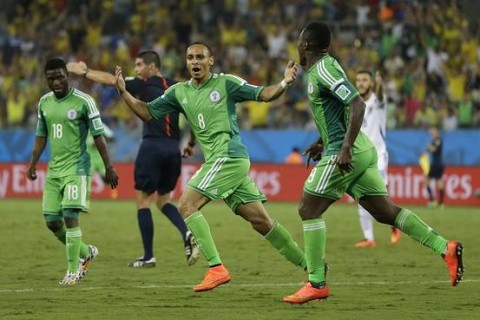 Nigeria halt Bosnia-Hercegovina’s hopes of making it to the second of the World Cup in their maiden appearance after losing 0-1 to the Super Eagles in their second group F encounter in Cuiaba on Saturday.

Prodigal son, Peter Odemwingie’s only goal of the encounter was all the African champions needed to keep Nigeria’s hopes alive in the competition. 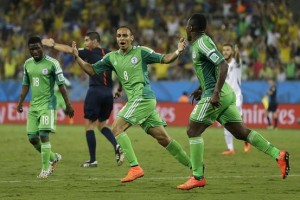 Coach Stephen Keshi made three changes to the team that drew 0-0 against Iran on Monday, with Chelsea winger Victor Moses the most conspicuous star missing in Saturday’s starting eleven.

Injured defender, Godfrey Obobona was replaced by team captain Joseph Yobo, who put up one of his best performance in the national colour in recent time on the day, while former Golden Eaglet captain Azeez was made to sit on the bench for Michel Babatunde.

In all, it was a much better performance from the Nigerians, who retain their second spot in the group with four points behind former world champions, Argentina who have six points after securing a narrow win over Iran earlier on Saturday.

Nigeria need must have defeat against the Argentines in their last group game on Wednesday to secure a place in the second round.