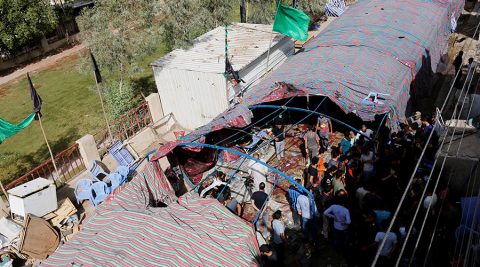 BALTIMORE, MD (AFRICAN EXAMINER) – No fewer than 32 people have been killed, while over 60 injured in a suicide attack, which targeted Shia worshippers in Baghdad, the Iraq’s’ capital.

According to officials, the blast was carried out on a tent in a crowded market in a northern district of the capital city.

The attack took place when many Shia pilgrims were taking part in mourning rituals, commemorating the killing of the Prophet Mohammed’s grandson, Hussein, in the 7th Century.

Other Reports BBC indicated that a militant detonated a suicide vest in the tent at lunchtime, when the pilgrims were at the peak.

The so-called Islamic State (IS) has claimed responsibility for the bloody attack.
In a statement, published through the messaging service Telegram, the Saturday’s attack was carried out
“in the middle of a gathering” in the Shaab area of Baghdad.

It would be recalled that in July, a truck with explosives was detonated the in central Baghdad’s popular shopping district of Karrada. The blast was described as the deadliest single bomb attack in Iraq since 2007.

The latest attack occurred as Iraqi Forces prepare for an offensive in northern Iraq on Mosul, the last IS-held major city in the Middle East country.