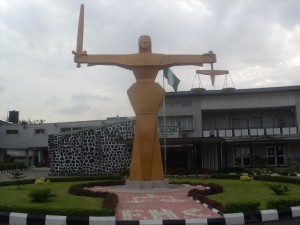 A Lagos Magistrate Court, sitting in Ikeja,  on Wednesday remanded  41 year old, Emeka Uchenna, at Kirikiri prison until his bail conditions are met,  over allegedly swindling his victims to the tune of N1.3 million.

It was gathered that the suspect was a tenant in the said apartment when the former landlord of the house appointed him a caretaker to the house and handed over to the suspect some receipts that can issued to prospective tenants.

The said landlord sold the house which comprises of 16 flats to the new landlord Tajudeen Yusuf, however, the defendant, instead of handing over the flat he was occupying to the new landlord, after he moved to his own house which he built, he let out the three bedroom flat to three different tenants who he collected money from.

One of the victims Izuchukwu Nwagbo, revealed that, he has since become a destitute with nowhere to lay his head, he further stated that he paid the defendant the sum of N550,000for the said flat on September 23, 2013 and was still preparing to move in to the house, when he discovered that another person is now occupying the said apartment, he reported the matter to the police and this led to the arrest of the defendant.

According to the prosecutor, Chinalu Uwadoiye, the offence committed is contrary to section 312 (3) and punishable under section 285 (1) of the criminal laws of Lagos state of Nigeria 2011.

However when the charge was read to the defendant, he pleaded not guilty and the magistrate granted him bail in the sum of N500,000,with two responsible sureties in like sum.

One of the surety who must deposit N50,000 in to the account of the court registrar.

Magistrate Miss Akinde adjourned the matter to December 16, 2013, for mention.