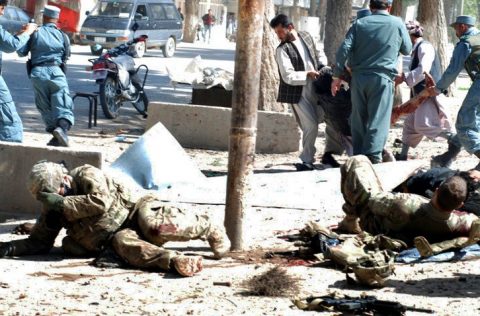 BALTIMORE, MD (AFRICAN EXAMINER) – About 43 Afghan soldiers Thursday were killed while nine wounded after two suicide bombers in Humvee trucks targeted a military base in the southern province of Kandahar.

Apart from this, six persons were said to be missing while 10 militants are believed to have died.

The Taliban has claimed responsibility for the early morning bloodshed.

In the attack, two members of the security forces have died separately in a siege on police headquarters in the eastern province of Ghazni.

The attacks were the third and fourth major assaults on Afghan security forces this week.

While confirming the incident, Defence Ministry Spokesman Dawlat Waziri said “unfortunately there is nothing left inside the camp; saying the attackers have burned down everything they found inside”.

Two days earlier, Taliban suicide bombers and gunmen killed at least 41 people when they stormed a police training centre in the eastern Afghan city of Gardez.

A total of 150 people were injured in the violence. The local hospital, in Paktia province, said it was “overwhelmed” and issued an urgent appeal for blood donors.

The same day, at least 30 more people died in car bombings in neighbouring Ghazni province. Armoured Humvee vehicles filled with explosives were detonated near the provincial Governor’s office, before gunmen moved in.

Afghanistan’s army and police have suffered heavy casualties this year at the hands of the Taliban, who strive to take over the control of the country.