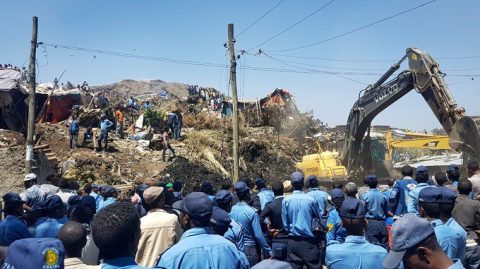 BALTIMORE, MD (AFRICAN EXAMINER) – No fewer than 48 people have been killed in a landslide at a vast rubbish dump on the outskirts of Addis Ababa the Ethiopia’s capital.

The officials said many people are still missing since the landslide occurred Saturday night at the Koshe landfill. A resident said 150 people were there at the time. Many children were reportedly among the dead.

A number of makeshift houses are presently buried under tonnes of waste.

The area has been a dumping ground for Addis Ababa’s rubbish for over five decades.

There are fears that the death toll could rise further.

Hundreds of people who attempt to make a living by scavenging at the landfill site, sifting through the rubbish for items they can sell. Reports said some people even resided at the rubbish dump permanently.