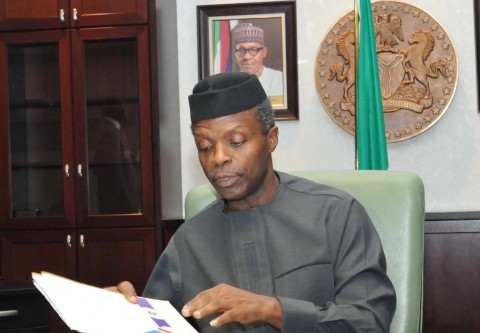 BALTIMORE, MD (AFRICAN EXAMINER) – Nigeria lost about $15B to fraudulent and corrupt practices in the security equipment spending during the last administration, Vice President, Prof Yemi Osinbajo, has disclosed.

He also expressed the hope that the implementation of the 2016 budget would commence soon.

“In the next few days we will begin the implementation of one of the most ambitious budgets in our history. Ambitious not just in its size but more in its broad range of fiscal and other socio-economic policies.” the Vice President explained.

The Vice President spoke on Monday at the book presentation of the Ibadan-based elite group, House of Lords, which just published an indepth analysis by different experts titled “Nigeria: The Challenges of Growth and Development, ” at the University of Ibadan.

While observing that the Buhari presidency has kept on a sustained fight against corruption, the Vice President said the country simply cannot sustain the shocking level of public sector corruption.

Continuing he disclosed that “it was discovered a few days ago that the total amount of money lost just to corruption in part of and provision of security equipments in the military is closer to 15 billion US dollars.”

While the nation’s foreign reserves is now around about $27B, Prof Osinbajo, driving home the stark significance of the such corruption, noted that the $15 billion figure “is more than half of the current foreign reserves of the country.”

According to him, “I believe strongly that it is important to send a message that no public officer can steal the resources of this country and expect to escape. I hope the message would be loud and clear and it will inform behaviour in the future.”

Throwing a challenge to the generality of the Nigerian elite, Prof Osinbajo said the limits of the growth and development of most nations largely depend on the strength of the value-driven influence of their elite, indeed it is evident that the reason for the development and growth of most societies is not resources, but values. (otherwise African countries will be the most developed.)