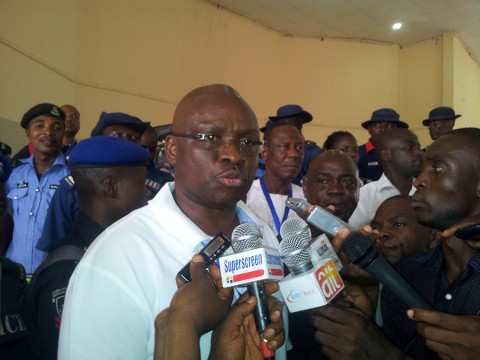 EKITI, NIGERIA (AFRICAN EXAMINER) – An Ekiti State High Court sitting in Ado Ekiti has declined an ex parte order sought by Governor Ayodele Fayose to restrain the Economic and Financial Crimes Commission (EFCC) from investigating the finances of the State.

Justice Cornelius Akintayo refused granting the order on grounds that all the defendants in the case should be put on notice to prepare for their defence at the court.

The judge consequently adjourned the suit to August 23, 2016 and ordered all parties in the suit to appear before him when the Motion on Notice would be heard.

The suit was filed by Ekiti State Attorney General and Commissioner for Justice, Owoseni Ajayi, to stop the impending investigation of the accounts of the State government by the EFCC.

Another relief sought by the plaintiffs was an order stopping the arrest of the Commissioner for Finance, Accountant General and the managers of the affected banks.

Defendants in the suit including the Speaker of the House of Assembly; EFCC, Independent Corrupt Practices and Other Related Offences Commission (ICPC), Department of State Services (DSS), Commissioner for Finance, Accountant General and five banks doing business with state government and the managers of those banks.

The plaintiffs were represented by Barrister Ejelonu, a lawyer in the chambers of the Attorney General held brief for Ahmed Raji (SAN) who argued the motion ex parte.

However, a senior lawyer, Kolade Ilesanmi, who was in the same court when the judge declined this order, commended Justice Akintayo for rejecting the motion so as to prevent the anti-grant agencies from investigating Ekiti government accounts.

Ilesanmi said: “Myself and another counsel, Abubakar Ajibade, who came for different matters stood up as friends of the Court and commended the judge for the ruling.

“We also adverted the minds of the Court to similar case before the Akwa Ibom High Court in which the judge granted a motion Exparte which has now landed him in trouble with the National Judicial Council (NJC).