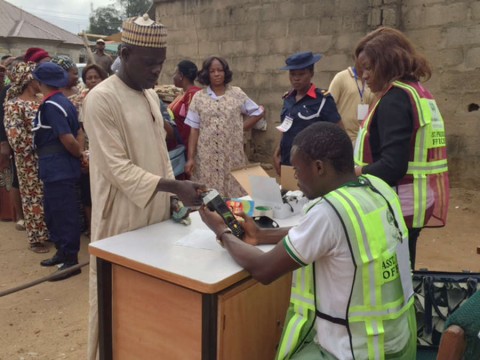 Our Correspondent who went round local councils such as Agege, Ikeja, Ojokoro, Iju, Ishaga and Ogba in Ifako Ijaiye Local Councils reported that INEC officials arrived early with some of the voting materials.

Some eligible voters also came out early to be accredited. There are pockets of challenges encountered with the card reader.

Similarly, the council areas were largely peaceful with light presence of security operatives, except those manning the polling units.

Accreditation is still ongoing at the polling units in the local government areas as at 11:30 am.

Meanwhile, President Goodluck Jonathan has again called on politicians and Nigerians to conduct themselves very well during the election.

Jonathan stated this morning after his accreditation at Otueke in Ogbia local government area of Bayelsa State.

President Jonathan who noted the global attention was on the country, enjoined Nigerians to cooperate with the INEC officials, adding that every voter who showed up for accreditation and voting would be attended to.

He recalled the recent visit of many leaders in the sub region, continent and across to the country, all to ensure that the polls were free, fair and credible.