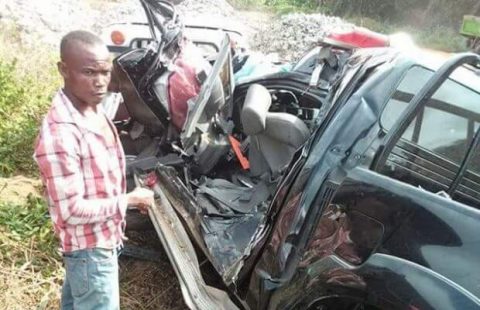 (African Examiner) – Less than one week after 18 persons lost their lives in a ghastly auto crash  along the Owerri-Onitsha expressway,in Imo State, five persons have been roasted beyond recognition in a fatal motor accident that occured along the Enugu/Markurdi express way.

According to the Enugu state police public Relations officer PPRO, Ebere Amarizu, who disclosed to newsmen on Friday in Enugu, said the incident occurred at Obolloafor area of  udenu local Government Area of Enugu  state.

African Examiner recalled that the Imo mishap happened on Monday.

He said the mishap also left many people with various degrees of injuries, adding that it “occurred on 28/2/17 at about 1.30 pm

“The accident which took shape of head on collision occurred when a SCOA commercial bus coming from Markurdi road axis allegedly collided with a Mercedes Benz car with registration number SMK 605 CD coming from Enugu axis of the expressway at Ohulor along Enugu/Markurdi road.

“Following the head on collision, vehicles burst into flames and in the ensuing circumstances, left about five persons burnt beyond recognition

Amarizu, said on arrival to the scene, police operatives from the Obolloafor Division of the state police command assisted in the removal of the wreckages, “as well as conveyed the injured victims to hospital for medical attention.

“The cause of the head on collision is yet to be established” the Enugu police spokesman stated.