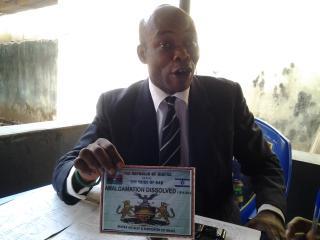 (AFRICAN EXAMINER) – For the third time this year, leader of the Biafra Zionists Federation, BZF, Barr. Benjamin Onwuka was on Monday arrested in Enugu by the police and operatives of the Department of State Security Services DSS, alongside some other members of his group.

Our Correspondent reports that a combined team of security operatives comprising of the Department of State Services, DSS, and the Nigeria Police carried out the operation.

They were apprehended after another failed attempt to enter the Enugu Government House for the inauguration of Biafra.

A source hinted that they had marched from the Presidential Road, through Rangers Avenue, but were stopped at the Bissala Road entry to the Government House by security operatives.

Deputy Leader of the group agitating for the declaration of Republic of Biafra, Mazi Ambrose Ugwu, who confirmed the arrest to newsmen, said whereabouts of their members remained unknown.

He said: “Our people left this morning (Monday) for the Enugu Government House to foist the Biafra flag, but they were stopped on getting to close to the road leading to the place.

“DSS operatives stopped them from entering the Government House. They told them to stay within the Bissala Road axis and do whatever they wanted to do.

“However, our leader refused, insisting that he must be allowed to enter the Government House. After a while, they brought vehicles and told them to enter, claiming that they were taking them to a place for a dialogue.

“As we speak, we have not heard from them. As far as we are concerned, this is abduction, because they were taken to unknown place. We have gone to the State CID but they are not being detained there.

“We are, therefore, calling on the international community, especially, US President Donald Trump and the Prime Minister of Israel to intervene for their immediate release.

“From the information I have, over 50 of them were arrested; they were not armed; they are just freedom fighters. Should anything happen to them, we will hold the South-East Governors responsible.”

However, both the Police and the DSS are yet to make any official statements on the development.