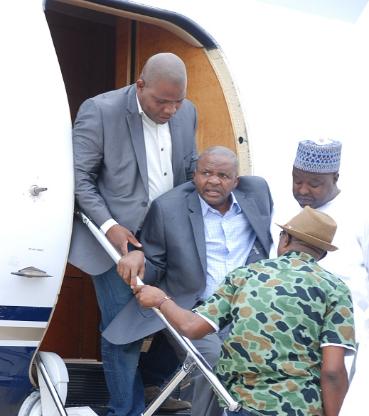 The ailing Gov. Danbaba Suntai of Taraba State, north east Nigeria has dissolved the executive cabinet of the state
even as controversy continues to trail his state of health.

The sack affected all commissioners and Special Advisers, while only Senior Special Assistants retain their jobs.

Gov. Suntai’s Media aide Sylvanus Giwa made the announcement today at the government in Jalingo.

A former Attorney General and Commissioner of Justice in the state, Timothy Katap was immediately named as the new
Secretary to State Government, SSG while Aminu Jika is the new Chief of Staff.

Recall that the state house of assembly only yesterday requested the governor to prove his state of health after he
sent a letter to the lawmakers saying he is ready to resume work.

Mr Suntai was flown to Germany and was later transferred to the United States to receive medical treatments following
injuries he sustained in a plane crash that almost took his life.