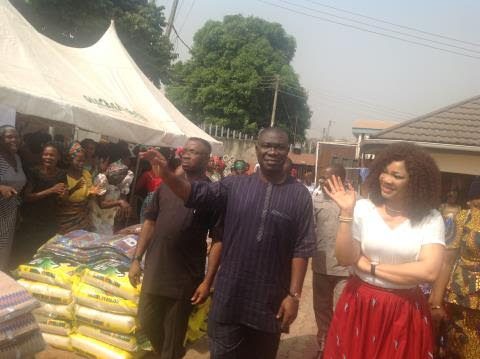 ENUGU, NIGERIA, (AFRICAN EXAMINER) – For wife of the Nigerian Deputy president of the senate, (Dr) Mrs.  Nnwaneka Ekweremadu, there is absolute joy in sharing, especially with the less privileged and vulnerable in the society.

From time immemorial, “love sharing” like the biblical tithe had always attracted heavenly reward From God Almighty himself who is the giver of all wealth.

Perhaps, it is against the back drop of God’s admonishment in the (Holy Bible), that Man, should love his neighbour as him self, that Mrs. Ekweremadu, had over the years, made it a tradition to share Christmas joy with the less privileged and vulnerable, especially widows in the five local government areas of Enugu west senatorial district, which the husband, chief Ike Ekweremadu, represents at the upper chamber of the Nigeria’s National Assembly, NASS.

For several years running, 1997 precisely, Mrs. Ekweremadu and the husband, have continued to put smile on the faces of widows as well as give hope to the hopeless in the locality, especially during christmas season.

Only recently, senator Ekweremadu, presented  sowing machines to dozens of less privileged women and widows in his constituency as part of his women and youth empowerment programme, aside the scholarship scheme for the people which has been running for years now.

The 2016 widows annual christmas, get together by Mrs. Ekweremadu, took place on Friday 23rd December at their Enugu residence, where a total of 250, 000 (two hundred and fifty thousand) widows from Enugu West senatorial zone received a bag of rice, wrapper and 10,000 cash from the senators wife, just as the women were also lavishly entertained by the lawamkers.

At the event, 50 widows drawn from each of the five local government areas in Enugu west senatorial district totalling 250, could not hold back their tears of joy, as they rained blessings on the Ekweremadu family.

Some of the beneficiaries of the largesse who spoke in Igbo dialect, said it would have been difficult for them and their families to afford a bag of rice this christmas, especially with the ongoing economic recession.

Addressing the women  Mrs. Ekweremadu said reaching out to widows during the festive period was a family tradition of celebrating the widows.

According to her, “Christ ministered to not only the spiritual needs of the people while on earth, but also to their physical needs, he fed the multitude.

“So, every Christmas, we try to make them (widows) celebrate with us, we select about 250 of them from the five local government areas and each year we try to take different people so that whatever we are giving will go round.

“We have been doing this since 1997 when the Ikeoha Foundation was founded. We started with the youths, giving scholarships to the indigent students and then at a point we extended it to Igboeze North and Enugu North.

“After that, we thought about adult literacy whereby we give education to thousands who had no opportunity to have formal education through adult literacy centers, which we set up in all the five Local Government Areas.

“By God’s grace, we hope to keep faith with the tradition, as part of our own way of giving back to the community that made us”.

In his remarks, Senator Ekweremadu, noted that the spirit of sharing is an African tradition that generate happiness and ensure social stability in the absence of a formal social security mechanism that caters for the less privileged in the society.

“You know in the advanced world, there is a social security network that takes care of the old and vulnerable, the unemployed, and the poor and so on but here, our system does not make allowance for that.

“I grew up in a system that has an inbuilt social security mechanism where we are our brother’s keepers, where we cater for each other.

“If you don’t have yam, you share from the one of your neighbour and you can go to your neighbour’s house to get light and lit your house and when somebody gets admission to university, people contribute money to ensure the person gets the education.

“Everybody’s problem in those days was each other’s problem but as the society progressed, some of those attributes of our community began to dwindle, but some of us who believe that we have to keep it especially when government have not come up with a defined social security programme, it is important that we ensure that everybody counts, that everybody enjoys the good things of life, that whatever God has given you, you need to find a way of sharing it with the rest of the community.

“This way, we can generate happiness and help secure our system,” the Senator stated.

The lawmaker however, called on Nigerians to show love to their neighbours at Christmas, as that remains the fundamental message of the yuletide.

The Senator, who said Christmas would be empty without acts of love as shown by Christ, also observed that love was also engrained in African cultures.

He regretted that the nation had lost much of her traditional social security values and urged that they be reflected on and revived at Christmas.