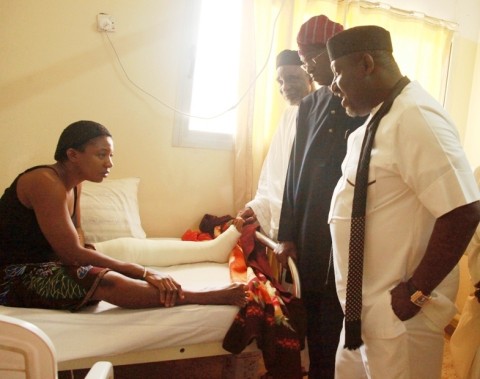 Members of the All Progressives Congress (APC) Governors’ Forum Wednesday paid a sympathy visit to victims of Monday’s bomb blast at the Nyanya Municipal Motor Park in Abuja who are currently receiving treatment in hospitals in the Federal Capital Territory, describing the devastation caused by the blast as a killing too many. 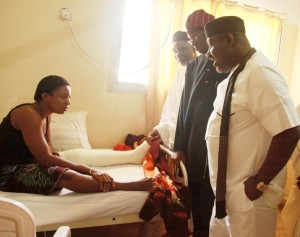 Led by Chairman of the Forum and Imo State Governor, Owelle Rochas Okorocha, the members, which included Lagos State Governor, Mr. Babatunde Fashola (SAN), Vice Admiral Murtala Nyako of Adamawa, Senator Ibikunle Amosun of Ogun, Dr. Kayode Fayemi of Ekiti, Tanko Almakura of Nassarawa and Magatakarda Wamakko of Sokoto states, condoled with families of those who lost their lives in the incident which they described as unfortunate.

Briefing newsmen after the visit, which took them to the National Clinical Research and Training Centre, Asokoro, and National Hospital, Abuja, the Forum Chairman expressed sadness that such calamity should befall the nation at this time adding that no nation could survive under such atmosphere of insecurity.

“For the Nyanyan incident, we in the APC Governors’ Forum join millions of Nigerians to condemn these unruly acts which do not do our nation any good. At this moment, our hearts go out to those who lost their loved ones. We know that they must be in serious pains; what happened was rather unfortunate and we can only say that this is one killing too many”, the Governor said.

He said as a way to support families of victims of the disaster, members of the Forum, who had earlier met at Imo Governor’s Lodge, Abuja, had decided to establish a Trust Fund adding that the APC Governors’ Forum found it worrisome that the incident of loss of life and shedding of blood has continued to increase on a daily basis.

Calling on President Goodluck Jonathan to investigate the incident, Okorocha declared, “We want Mr. President to show leadership at this moment and do all within his capacity and capabilities as a President to fish out those who were involved. We urge all Nigerians to take courage and fight this common evil”.

He described the bomb incident as unfortunate and ugly adding that such unfortunate and unnecessary loss of life would not do the country any good. “Our nation has experienced increasing loss of life and almost on a daily basis we hear one ugly story or the other about loss of life. And just as we are talking about what happened in Nyanyan, a few hours ago or few days ago we also learnt about 100 young girls kidnapped; some records say it is 200. A nation cannot live like that”, the Forum Chairman said.

“So we appeal to all Nigerians, irrespective of political party, tribe or religion, to come together, unite to fight this evil of the moment which is terrorizing our nation. We also want to appeal to Mr. President to defend that part of our constitution that guarantees safety of life and property of all citizens”, the Governor said.

Announcing the Forum’s decision to establish a trust Fund, the Forum Chairman declared, “We shall also join forces with other democrats to ensure that this madness ends as quickly as possible”. He prayed for the repose of the souls of the dead and for divine support for the families they left behind.