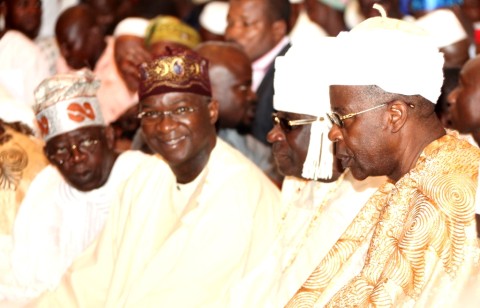 Lagos State Governor, Babatunde Fashola and the former Governor of Lagos, Asiwaju Bola Ahmed Tinubu have urged Nigerians to imbibe the lessons of the sacrifice that is necessary to move the nation to greater heights. 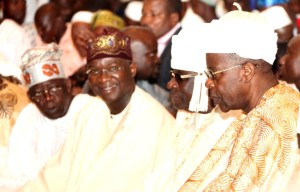 Fashola, who spoke after observing the Eid –El-Kabir prayers at the Lagos Central Mosque on Nnamdi Azikiwe Street, Lagos, Southwest Nigeria said when Nigerians imbibe the spirit of sacrifice, the Nigeria that everyone dreamt of would be realised.

He reiterated that Nigerians would experience a country “where people were their brother’s keepers, where people are hopeful, day after day, year after year and where all of the promise that everyone feels will materialize.”

Speaking, Tinubu stressed the need for Nigerians to sacrifice for the growth of the nation, saying this was what Islam stood for.

“There is nothing in multiple but sacrifice. Sacrifice at a given specific period for the rest of Islam and humanity and forgiveness of sins. And to teach us, indivisible commitment to humanity, that we should be able to make sacrifice, forgive, build tolerance and obedience to the calling of Almighty God,” he said.

The former governor said that sacrifice and prayer would make Nigerians not to see difference between religion and faith as  “our Independent isn’t based upon division but tolerance, coexistence and understanding, while circularity of Nigeria is extremely important. It is for us to make progress in this country. That is all we must pray for. Any divisiveness must be eliminated, must completely be neutralised as a nation.”

Tinubu stated that God never called for war against one another and spilling of bloods of innocent citizens., stressing that ‘God wants us to co-exist and worship.

“We should acquire knowledge and emulate knowledge and use the knowledge to better the condition of every human being in the country, to keep our children in school and let them be educated, innovative, creative and obey the wish of almighty God,” he said.

In his special message, the Chief Imam of Lagos, Alhaji Garba Akinola Ibrahim emphasized the need for all Muslim adherents to have abiding faith in Almighty Allah and not to indulge in any sinful practice.

He said as the Muslims celebrate the Eid El Kabir festival, everything should be done in moderation and in reverence to the significance of the mercy of Almighty Allah who replaced the proposed sacrifice of Prophet Ismail by Prophet Ibrahim with a ram.

Notable among those who also observed the special Eid prayers include some members of the State Executive Council like Commissioner for Special Duties, Dr Wale Ahmed, Information and Strategy, Mr Lateef Ibirogba, the Chief of Staff to the Governor, Mr Lanre Babalola and the National Legal Adviser of the All Progressives Congress (APC), Dr Muiz Banire and hundreds of Islamic faithful from far and near.