Attack On APC Rally In Rivers An Assault On Democracy 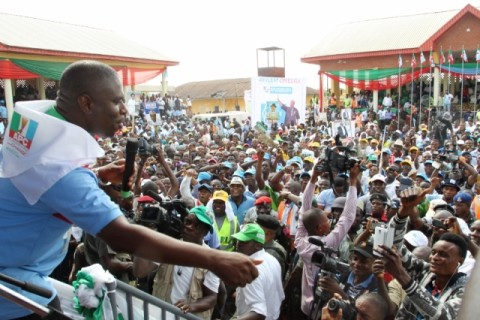 The Committee for the Protection of Peoples Mandate (CPPM) has condemned in strong terms the criminal, barbaric and undemocratic assault on the All Progressive Congress (APC) governorship rally in Okrika, Rivers State on Tuesday by some hoodlums which resulted in the death of a police man and injuries to several others as well as destruction of properties worth millions of naira.

The rights group, in a statement issued and signed by Nelson Ekujumi, its Executive Chairman said the group condemned this cowardly and despicable attack on a peaceful political rally meant to sensitize the electorate in line with democratic tenets ahead of the 2015 general elections and regard it as an assault on democracy.

“This pattern of attack on the opposition parties has become a regular occurrence in Rivers State which portends grave danger for national peace, security and democracy if not nipped in the bud before it spreads.

“We want to use this medium to admonish the sponsors and perpetrators of this evil act to desist from violating the constitution which permits right to life, freedom of association and right to information which has been violated.

“While commiserating with the family of the deceased policeman and praying that God Almighty should grant him eternal rest and wishing the injured, speedy recovery, we want to call on the security agencies to rise up to their constitutional responsibility,” the group lamented.

CPPM demanded immediate investigation and arrest of the sponsors and perpetrators of this violence and previous ones and immediately commence prosecution of the culprits connected with the violence in Rivers State.

It urged the security agencies in Rivers State to rise up to the occasion by performing their constitutional duties impartially and professionally.