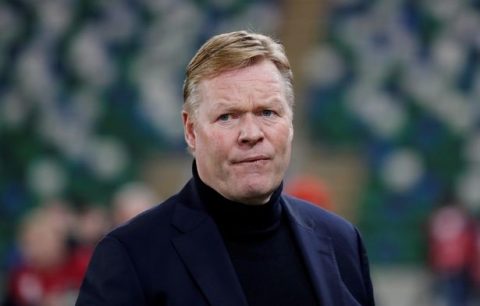 The 57-year-old left his role as Netherlands boss, with two years left on his contract, to sign a two-year deal with the Spanish giants.

His predecessor, Quique Setien was sacked two days ago, after last weekend disgraceful 8-2 loss in the hands of Bayern Munich.

Koeman played for Barcelona between 1989 and 1995, helping them to four league titles and the European Cup.

The Catalans finished second in La Liga last season, failing to win a trophy for the first time since 2007-08.

The five-point gap to champions Real Madrid and the humiliating 8-2 defeat by Bayern Munich in their Champions League quarter-final last week culminated in the dismissal of Setien on Monday.

The club also announced Ramon Planes as the new technical director. He was the assistant to Eric Abidal, who left his role as sporting director on Tuesday.

Koeman had his first taste of coaching when he was assistant to national team coach, Guus Hiddink during the 1998 World Cup, before becoming Louis van Gaal’s right-hand man at the Nou Camp from 1998 to 2000.

He eventually went on to have success as a manager back in his homeland, winning league titles with Ajax and PSV.

The new Manager had a brief stint at Valencia in 2007 brought Copa del Rey success, but he was sacked after the side finished only two points above the relegation zone in La Liga.

Again, after spells at AZ Alkmaar and Feyenoord, Koeman was appointed by Southampton in 2014 where he recorded a huge success, guiding the Premier League club to seventh- and sixth-place finishes, which resulted in qualification for the Europa League group stage.

Koeman also played for Barcelona as a defender between 1989 to 1995. He was well known for his goal scoring, long–range shooting, and accuracy from free kicks and penalties.