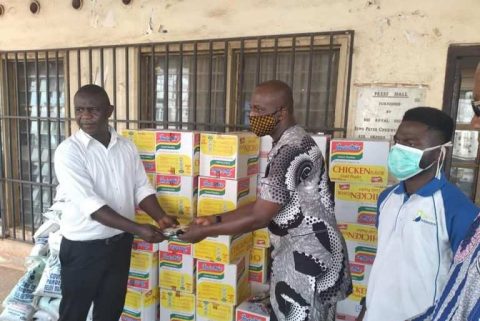 (AFRICAN EXAMINER) – An international non-profit humanitarian organization, Baywood Foundation, on Thursday distributed Covid 19 lockdown palliatives to the Enugu state Council of the Nigerian Union of Journalists, for onward distribution to its members.

It said the gesture is in recognition of the fundamental role the media play in providing daily reports on the deadly coronavirus pandemic which is currently ravaging the entire world, including Nigeria.

The palliatives which are mostly food items, included, 50 bags of Rice, 50 bags of Indomie Noodles as well as 50 face masks, which the Foundation said, is aimed  at helping the journalists cushion the effects of the lockdown introduced by the Federal Government to help check the spread of the virus and also protect them in their line of duties.

Presenting the items at the NUJ press Centre, Enugu, on behalf of the Founder of the organization, Emperor Chris Baywood Ibe , Country Director of the Foundation, Barrister  Chukwudi Ojielo, regretted  that the government and many organizations have directed their attention towards health workers alone, forgetting the role of the media at this critical and crucial moments of our life as a nation.

He noted that the role of the media cannot be underestimated as they function to provide daily reports which help members of the public to keep abreast of happenings in the country as it relates to COVID-19 pandemic.

According to Ojielo, “We understand the place of the media in the fight agaist COVID-19, and we want them to know they are not left behind. That informed our decision to provide these palliatives.

Responding after receiving the items, the State chairman of NUJ, Comrade Rex Arum, said the gesture was unprecedented in the history of the union in the state.

He noted that a lot of journalists in Nigeria, have fallen while providing reports in recent times, regretting however, that such sacrifices are usually not appreciated by the government.

Arum said,: “The union cannot thanks the foundation enough. I am particularly overwhelmed  because it has never happened like this before, When you have a group that is thinking about the place of the media in the society” he said.

He promised that the media will continue to partner with the foundation in all of its activities in the state, adding that the union will maintain ethical standards while providing reports on the virus.

In his brief remarks, Acting South East Zonal National Vice president of the NUJ, Comrade Kenneth Ofoma, of the New Telegraph Newspaper, said there was no doubt that journalists are next to health workers in the fight against the deadly virus.

He, therefore, appealed to the government to include journalists in the insurance scheme giving the critical role they play as well as the provision of stabilization funds to help them stay afloat, even after the COVID-19 period.

Ofoma added: “We are calling on other public-spirited individuals in the society to remember the journalists at this very critical times.