Before the PDP Elects a Presidential Candidate, By Sufuyan Ojeifo 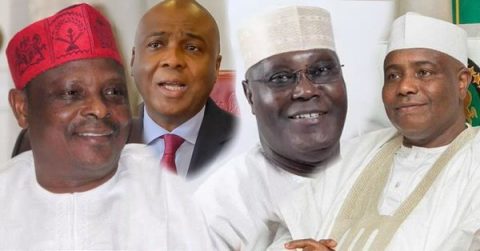 (AFRICAN EXAMINER) – If experience in politics and government were to be the sole determinants of qualification, the People’s Democratic Party, PDP, should be looking in the direction of one of three persons as its presidential standard bearer at its election primary holding in Port Harcourt this weekend, to wit: former vice president, Alhaji Atiku Abubakar, former Jigawa state governor, Alhaji Sule Lamido and former Kano state governor, Senator Rabiu Kwankwaso.

Apart from being recurring decimals in the politics of the fourth republic, the trio had their imprimaturs firmly stamped on the politics of the ill-fated third republic. Whereas, Atiku played a leading role in the strategic moves by the defunct Social Democratic Party, SDP, to secure a strong footing in the nation’s presidential politics, Lamido’s persona was writ large in the administration of the SDP as the party’s national secretary. Kwankwaso, on his part, was deputy speaker of the House of Representatives in that republic.

But if single-minded purpose and readiness to run for and occupy the position of Nigeria’s president on the basis of preparedness and self-motivation to confront the existential issues of governance, and not on promptings by godfathers, the fancy of political accidents and peer pressure or prospects of anchoring the nation’s presidency on camaraderie on which toehold the governor of Rivers state, Nyesom Wike, has built his open support for his lawyer-friend and Sokoto state governor, Aminu Tambuwal, then the PDP should look in the direction of Atiku.

Validation: Atiku bears the same can-do spirit that had continued to propel President Muhammadu Buhari’s interest in the presidency since 2003 until 2015 when he enjoyed a historic massive coalition of forces that galvanised a near national consensus on the imperative of his presidency. That sensational nationwide approbation had resulted in his defeat of an incumbent president, Dr. Goodluck Jonathan.  Indeed, the leadership of the All Progressives Congress, APC, was determined to ensure the emergence of Buhari as the standard bearer and to leverage on his electoral strength to upstage the presidential applecart of the PDP. The APC was not distracted.

It would be recalled that the APC settled for Buhari who was its most electorally capacitated and sellable presidential material in the 2015 presidential election. The PDP is being harassed to trifle with its best aspirant in the circumstance of the unfolding presidential battle to dislodge Buhari. Whereas, former Lagos governor, Bola Tinubu, who led the effort to realise the candidature of Buhari on the massive opposition APC platform, did not consider friendship, because what was at stake was much more than what friendship could deliver, Governor Wike has committed an egregious strategic blunder by allowing his interest in friendship to preponderate his political decision and exertions on the choice of PDP’s presidential candidate.

Pushing through his preference in the in-your-face-manner with which he is rambunctiously promoting and selling the aspiration of Tambuwal may be counterproductive to the party. Regardless of misgivings about his preference, he seems to have crossed the Rubicon on the matter. Therefore, his possible success at intimidating, harassing and heavily inducing some of his governor-colleagues and delegates in order to swing the majority votes to Tambuwal may produce off-putting reactions within the party.  Besides, it may produce some ricocheting negative effects on the external outlook of the party especially in the presidential election.

The point being made here is that whereas it was not difficult to rally other aspirants behind Buhari’s candidature in 2015 given his charisma, gravitas and the cult-like support he enjoyed and still enjoys in the core north, Wike should have been true to himself in assessing the capacity of Tambuwal’s persona and politics to galvanise and unite behind him the other aspirants if he emerges as the candidate. Will the other aspirants, given the evident hands of Wike in the process, find it convenient to accept Tambuwal’s candidature?  Besides, is there a repository of cultic followers in the core north, not to talk of the south where he is hardly known, that Tambuwal can leverage on to defeat Buhari 2019?

Will the PDP allow one man’s desperation, to impose his friend as candidate, to endanger its members’ collective interest? Much as a vast majority of PDP leaders are desirous to see Buhari defeated in the 2019 election so they can have a reprieve from their current travails in the hands of the Economic and Financial Crimes Commission, EFCC, over their involvement in the handling of the 2015 PDP campaign funds allegedly sourced from public treasury, that desire may come to naught if they fail to redirect the party on the right trajectory to ensure the emergence of the best candidate for the 2019 presidential battle.

The Tambuwal persona, in the event Wike succeeds in foisting his candidature on the party, cannot arguably engender the collective acquiescence by others in his support because the justifications are simply and evidently weak. There must be some strong reasons that would bring about such consensual support just as the Buhari candidature witnessed in the 2015 election. Tambuwal is not sure-footed about the presidency.  The presidential race is not a game of chance as the Sokoto state governor’s attitude is said to have shown.

A grapevine said that besides throwing his hat in the race for the party’s presidential ticket, his proxies are purportedly holding in trust for him the governorship and senatorial tickets in his state as fallback positions. It means that Tambuwal does not even have the savvy to put his eggs in one basket in the race for the presidency. It is left for the PDP leaders and delegates to decide if he approximates their ideal presidential candidate.

Conversely, it is believed that a majority of the presidential aspirants will not find it difficult to support Atiku on account of his capacity, age, experience, respect, nationwide structure and acceptability, commitment to restructuring which the southern part of the country is enamoured of and the possible ramifications of power devolution that will make the central government unattractive moving towards the 2023 presidential election if he becomes president in 2019.

Should the PDP leaders and delegates fail to act in the overall interest of the party and they allow Wike to have his way, they may all be headed for a doomed presidential adventure. The fate of the PDP in the forthcoming presidential battle should not be left for Wike to decide.  First, he does not have the political savoir-faire, the kind that Tinubu deployed in the emergence of Buhari at the APC presidential primary election in Lagos in 2014.

Second, he does not have the calmness and subtlety to engage with stakeholders nationwide in dispassionate consultations and mobilisation, except that his sense of political pride and invincibility is largely sustained by the massive financial resources at the disposal of the state under his superintendence. That is what defines him.

Indeed, there is nothing in the books that says that Wike must always have his way as he did with the imposition of Uche Secondus, his friend, as national chairman of the PDP at the expense of the south west zone to which the position was originally ceded. The PDP leaders and delegates owe it a duty to themselves and their party members to do their due diligence and speak emphatically with their votes in the presidential primary election in support of the best of the aspirants.

Ojeifo contributed this piece from Abuja via ojwonderngr@yahoo.com