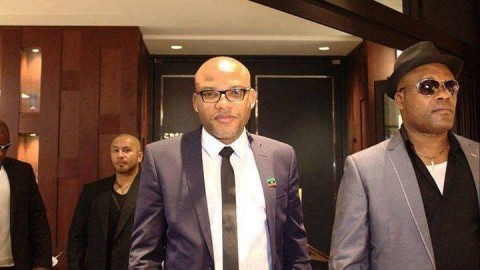 (AFRICAN EXAMINER) – New elected President General of Apex Igbo umbrella body, the Ohaneze Ndigbo, Professor George Obizor on Thursday declared that the issue of the Igbo nation pulling out of Nigeria to form Biafra were above the capacity of leader of the proscribed  Indigenous People of Biafra, {IPOB}, Nnamdi Kanu to decide.

The Ohaneze helsman, stated this in Enugu during a world press conference held at the National Headquarters of the organization in Enugu.

The president – General who said the run away IPOB leader “is one of “us, however advised him  to always listen to Igbo leaders, and desist from making ultrances capable of endergering the lives of Igbos both at home and in diaspora,insisting that “the issues of Biafra were above and beyond Kanu’s  his capacity to decide.

According to Obiozor, who was a one time Nigerian Ambassador to the United States and Isreal, the Igbo nation was not at war with Nigeria and has nothing pending before any institutional authority that demands a separate existence from Nigeria.

He pointed out that their mutual and collective responsibilities were sacred and must be respected, adding that Kanu must therefore listen because he is one of them since they are all in this dilemma together.

African Examiner recalled that the IPOB leader who jumped bail in Nigeria and ran away after he was charged with treasonable offence by Court, had few days after Obiozor emerged as the new Ohaneze boss, vowed that IPOB will not recognize the retired Imo state born diplomat.

Obiozor, however, noted that “we must understand that what late Chukwuemeka Odumegwu Ojukwu meant by the “bones shall rise again”, stating that he did not mean conflict, violence and war.

The Ohaneze chief, assured that security of Ndigbo irrespective of where they are residing will be  their priority of his adminisyration.

He explained  that his decision to contest for the president General of Ohanaeze Ndigbo was a decision not based on self-aggrandizement, personal ambition or self-promotion, but purely for service.

According to him,   the Igbo dilemma in Nigeria has finally come home at last hence, the need for the people  to take critical, even delicate decisions, adding that the problems confronting the Igbo nation needs pragmatic solutions and quickly too.

“The Igbo nation is not at war with Nigeria and has nothing pending before any institutional authority that demands a separate existence  from Nigeria.

“Nnamdi Kanu is one of us and he must listen to some of us for several reasons.

“The fact and reality are that the issues of Biafra are above and beyond his capacity to decide.

“He must listen because he is one of us and we are all in this dilemma together, and mutual  collective responsibility are sacred and must be represented  consequently, all action or utterances  that put Ndigbo in “present  and imminent  danger ”  or “harm’s way” must be avoided.

“We must also understand  what chukwuemeka Odumegwu Ojukwu meant by “the bone shall rise,  he didn’t mean conflict , violence and war.

“Definitely the bones have arisen re-incarnated or resurrected but in Ojukwu’s idea the mission is creative and constructive.

“Ndigbo are builders and not nation wrecked/destroyers

“Ojukwu meant the return of the “Can do spirit of Ndigbo that turns difficulties into dividends ” and obstacles  into opportunities.

“Therefore in this context and in the spirit of the times and collective  interest of Ndigbo.

” I appeal to our son Nnamdi kanu, ” act the part well, for there your honour lies.

“Ndigbo, believe me, we can have our people fairly united again , not really as Igbo state union days, but somehow closer. Many things unite us but we have given few things that divide us priority.

“That is our main problem and that can also change. But we must also once again invent a well defined common cause and a common sense of direction.

“We Therefore call on all Igbo diasporans to join hands with us to bring about the Accelerated development of Ndigbo” he stated.

On the issue of some aggrieved members who recently dragged him and his executive committee to court, the Ohaneze President -General decline comments on the issue, saying he cant make any statement on the matter since, it is pending in court.