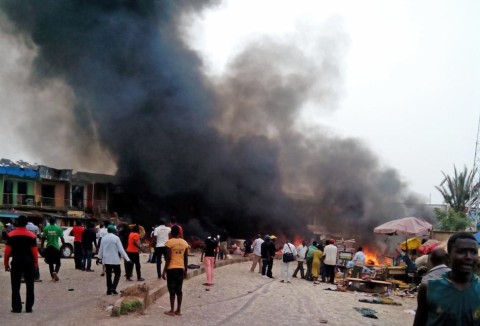 But the police disputed the figure, saying it is 46 people who died in the explosion, but noted that more casualties may have been recorded and that it will give more detail on the mortality rate as even unfold.

At least 118 people were killed in a car bomb attack in the central Nigerian city of Jos, the country’s relief agency said on Tuesday, warning that the death toll could rise further.

Twin bomb explosions occurred in the heart of the commercial center of Jos, Northeast Nigeria on Tuesday. The explosions, believed to have been caused by an improvised Explosive Device (IED), occurred around the busy Jos Main Market, between railway terminus and the temporary site of the Jos University Teaching Hospital.

Coordinator, NEMA, Mohammed Abdulsalam told AFP the “The exact figure of the dead bodies recovered as of now is 118. More bodies may be in the debris” of buildings which collapsed due to the intensity of the blasts.

However, Police Commissioner, Plateau State, Chris Olakpe confirmed 46 people dead in the twin bomb as 45 others were injured in the blast, adding that “We can’t rule out more casualties and carnage.”

Plateau State Information Commissioner, Olivia Dazyam said the casualty figures had not been ascertained as the figures were still being collated, adding that security had been drafted to the affected area.