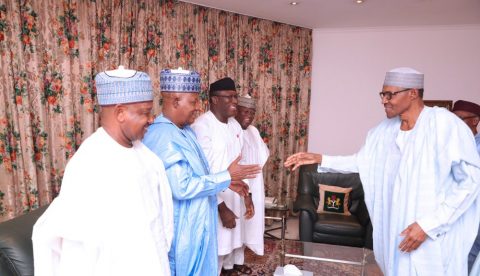 Reports indicated that the meeting came barely an hour after the President returned to Abuja after participating in Saturday’s Gubernatorial and State House of Assembly elections in his hometown, Daura, Katsina State.

The agenda of the meeting was not made public as the Governors declined comment when newsmen about outcome of their meeting with Mr. President.

However, it was gathered that the session might have been a review of Saturday, March 9 of Governorship and state assembly elections which held in 29 states.

Recall, that the Independent National Electoral Commission (INEC) had declared six Governorship elections in Adamawa, Bauchi, Benue, Plateau, Kano and Sokoto inconclusive while all the electoral processes were suspended in Rivers by the commission.

However, the INEC is expected to announce new dates for the supplementary elections in the affected states.

The APC serving Governors whose elections were declared inconclusive include Mohammed Abubakar of Bauchi state, Abdullahi Ganduje of Kano state and Jibrila Bindo of Adamawa state.