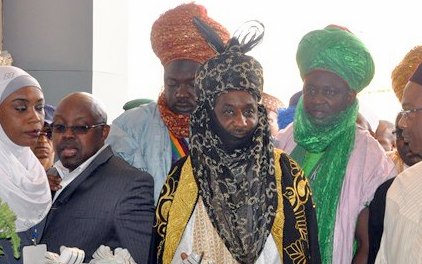 Kwankwaso, who installed Sanusi as the emir in 2014, said some state officials told him the president ordered the Sanusi’s dethronement.

The former governor who spoke to BBC Hausa on Wednesday lamented that “President Buhari is interfering in the affairs of Kano State.”

Meanwhile, President Muhammadu Buhari has denied of being part of the plot that dethrone the ex-Emir.

President Buhari in a statement issued Wednesday by his Senior Special Assistant, Garba Shehu stressed that the president knew nothing about the Sanusi dethronement.

“The President does not have a history of intervening in the affairs of any state in the country, unless the issue at hand is of national consequence. On such matters which impinge on national security, he has a duty of involvement as the law stipulates.

“As outlined in the Constitution, the appointment or removal of emirs and other traditional leaders is strictly within the jurisdiction of state governments.”

“It is unfair and disingenuous of opposition politicians to try to link the situation in Kano State to the federal government and the Nigerian President.” the statement stated.

Sanusi was removed from the throne on Monday by Kano State Government following allegation of disrespect to the state governor’s lawful instructions adding that persistent refusal of the Emir to attend official meetings and events organised by the government, without any justification, amounted to insubordination.

He was subsequently dethroned and banished to exile in a remote village in Nasarawa state.