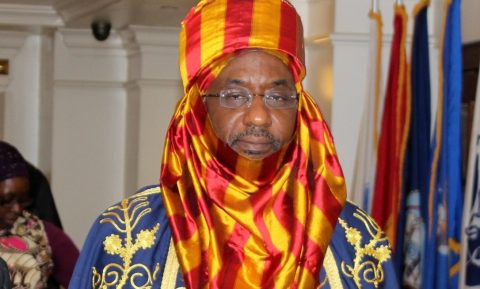 (AFRICAN EXAMINER) – The dust raised by the deposition of the ex-Emir of Kano, Muhammadu Sanusi II is yet to settle, as the State House of Assembly Monday suspended five of its members for six months.

Speaker of the House, Hon. Abdulazeez Gafasa who announced the suspension at the plenary disclosed that the action was in connection with the alleged misconduct and violation of the rules of the Chamber.

While announcing the Speaker said:  “The five members are suspended for violating the rules of the House especially Order IV Sub 4 a, b, d and e.

“They behaved violently and even attempted to snatch away the mace in a clear attempt to sabotage the sitting of the House’’.

Recall that some members last Monday at the plenary reportedly disrupted the sitting over alleged plans to sack Sanusi.

The paramount Monarchy was eventually deposed later the same day. He was also banished from the State and detained in Awe, a community in Nasarawa State, North Central Nigeria.

The alleged misconduct occurred when a committee engaged with the task to investigate dethroned Sanusi was about to submit its report to the House.

The report allegedly recommended the dethronement of the former vocal monarchy.