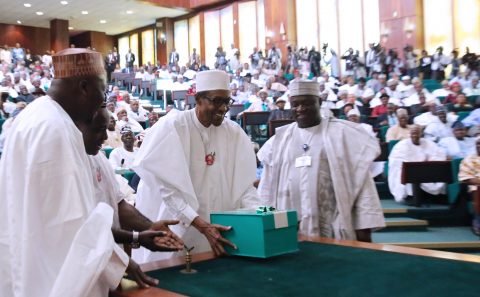 The Budget is titled ”Budget of Recovery and Growth” and proposed crude oil benchmark of $42.5 per barrel. The 2016 budget benchmark is $38 per barrel.

While the proposed budget presented estimated 2.2 million barrels per day of crude oil production, the exchange rate was put at N305 per dollar, as against N197 to a dollar in the 2016 budget.

The budget proposal also voted about N2.243 trillion for capital projects while estimated N2.9 trillion was budgeted for recurrent expenditure. This represents about 15.44 and 9.43 increase respectively, as contained in the 2016 budget.

The budget also proposed about N1.66 trillion to service domestic debts, while about N175.9 billion was voted to service foreign loans.