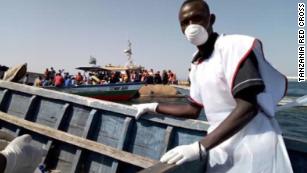 (AFRICAN EXAMINER) – The captain of an overloaded ferry that capsized on Lake Victoria has been arrested as Tanzania mourns more than 200 people killed in the latest maritime disaster in the East African nation.

Tanzanian President John Magufuli said the captain is in custody and ordered the arrest of all the other operators of the ferry, which capsized Thursday.

Magufuli told the nation in an address Friday that the captain left the ferry’s steering in the hands of a person not trained for the job, The Citizen newspaper reported. The death toll rose to 209 on Saturday, government spokesman Hassan Abbas told CNN, but it’s expected to go up as more bodies are pulled out of the water.

Initial reports indicated that overloading contributed to the deadly disaster, but an investigation will determine the exact cause, the Tanzanian leader said.

It’s unclear how many passengers were aboard the ferry. There are reports it had a capacity to carry 100 people, and it was carrying an estimated 400 instead.

Rescuers worked for hours to pull survivors out of the frigid waters Thursday and Friday, and they are still searching for hundreds who were likely onboard the overcrowded ferry.

“It’s been a bit difficult because of the fact that the ferry overturned with people and luggage,” Transport Minister Isack Kamwele said. “We have to remove the luggage first to get to the bodies.”

An engineer from the ferry was among the people rescued Saturday, the state-run Tanzania Broadcasting Corp. reported. He was among eight engineers aboard the ferry when it capsized, and he’d locked himself inside the engine room since Thursday./CNN