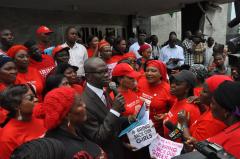 The All Progressives Congress (APC) women and Labour unions in Lagos State Tuesday joined the call for the rescue of the over 200 girls abducted from a secondary school in Chibok, Borno State a month ago by the terrorist sect, Boko Haram as they protested vehemently in Lagos, Nigeria.

The protesters marched from the Ikeja Computer Village to the State House, Ikeja chanting anti-Boko Haram songs. They wore red t-shirts, with the inscription, “Bring Chibok Girls Back Now and Alive,”

APC Women leader, Lagos State,  Chief Kemi Nelson, who led the women submitted a letter to the State Governor, Mr. Babatunde Fashola for onward dispatch to President Goodluck Jonathan, demanded, among others, the immediate and safe release of the girls.

In the letter read by Chief Nelson before submission to the Commissioner for Information and Strategy, Mr. Lateef Ibirogba, who received them at the Lagos House, Ikeja, on Behalf of the Governor, the women expressed dismay at the apparent inaction of the Federal Government towards securing the release of the girls.

They particularly accused the President and the government at the centre of insensitivity toward the incident recalling “with sadness” that despite the untoward happening and the fact that parents of those children were going through serious trauma, President Goodluck Jonathan danced publicly at a campaign rally of the Peoples Democratic Party in Kano State.

Noting that the kidnap of the Chibok girls was not the first of such incident in the country, the women told the President, “Like in the first kidnap on Tuesday January 14 2014, Nigerians and indeed the entire world have not seen any positive action. Instead, and sadly too, the local and international media are awash with saddening reports which point to complicity of inaction by even the Nigerian Military”.

They expressed shock at the Amnesty International disclosure that the Nigerian Military High Command was alerted four hours before the “unprecedented mass kidnap” and that even after the kidnap, the military kept away from immediately pursuing the terrorists in order to rescue the girls.

Noting that such reports did not depict seriousness on the part of the President in seeking the rescue of the girls, the women declared, “Mr. Presidents, we advise that you brace up to arrest the worsening security situation in the nation”.

The women, however, expressed relief that the international community, notably the United States of America, Britain, France, China, Israel and countries of the Economic Community of West African States (ECOWAS), have all offered their assistance towards rescuing the girls.

In their own letter to the President, the State Councils of the Nigeria Labour Congress (NLC) and Trade Union Congress of Nigeria (TUC), appealed to all well-meaning Nigerians, including religious leaders and the international community, to continue to put pressure on the Boko Haram to release the girls unconditionally.

The unions said they have chosen to toe the line of peaceful approach to the resolution of the problem because of its sensitive nature pointing out that if violence was employed in the effort to secure the release of the girls, it would lead to bloodshed and the casualty toll would inevitably include the girls themselves.

“We call on Mr. President and our allies to spare no rod to ensure that the Chibok Girls are brought back to their families and the nation hail and alive. We know that they would have to undergo medical and psychological treatment to heal the horrors they may have been subjected to”, the unions said adding that if all Nigerians work together as a single unit of humanity, the insurgency issue would be defeated.

Warning against any attempt by the international community to turn Nigeria into a theatre of war with terrorists like Afghanistan, Pakistan and others, the unions declared, “If we unleash the power of the working class within the confines of Nigeria and worldwide on anti-people  regimes or terror forces like Boko Haram, such bodies would disintegrate and collapse”.

Demanding the unconditional release of the girls by Boko Haram, the Unions also asserted, “We honestly hope that the Nigeria labour movement would not be forced to declare full battle against the abductors of the Chibok girls before the reasonable is done”.

Receiving the letters from the two groups on behalf of the Governor, the Commissioner for Information and Strategy, Mr. Lateef Ibirogba, thanked them for identifying with the rest of Nigerians, particularly the affected families, to seek the release of the Chibok girls.

The Commissioner, who expressed sadness at the nature of the abduction of the girls whom he described as “those expected to take over from us”, prayed that they would be rescued and returned to their families in good health, adding that the global reaction to the abduction has been spontaneous.

Hoping that the Federal Government would not misconstrue the action to mean that it is being sponsored like was the case during the mass action over fuel crisis, Ibirogba declared, “We are all in this believing that since no nation thrives on violence and irregularities that we have now, the God we serve will bring back these children hale and hearty”.

“We are happy that despite that some people in Abuja would have swept the issue under the carpet, the international community has taken it up and now we are all seeing the result and everybody is hearing the news globally. We believe that everybody has a right to life and nobody should be denied that right whether a minor or an adult”, the Commissioner said.