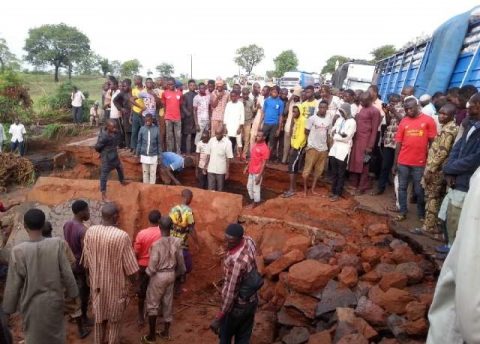 (AFRICAN EXAMINER) –  Vehicular traffic on the Mokwa-Jebba road has been paralysed following the collapse of a bridge after rainfall on Saturday night, the Federal Road Safety Corps (FRSC) has said.

Mr Bisi Kazeem, the FRSC’s Public Education Officer disclosed this in a statement on Sunday.

The News Agency of Nigeria (NAN) reports that the Mokwa-Jebba road, which links Niger and Kwara states, is a major transit route between Abuja and the Western part of the country.

Kazeem had earlier alerted the public to the collapsed of Mowo Bridge, which he said is located after Mowo Junction, 18km from Mokwa town in Niger.

According to him, the scene of the latest incident is about one km from Tatabu Bridge, which collapsed last in 2017 and was promptly fixed by the Federal Government.

Kazeem said vehicular traffic had been affected on both sides of the road, and that there was no thoroughfare at the moment.

He, therefore, advised motorists to, in the interim, ply the Lokoja road as an alternative “if going to Lagos and Abuja.’’

He said Corps Marshal, Dr Boboye Oyeyemi, had ordered immediate deployment of more personnel and logistics on the alternative route to manage the anticipated rise in traffic.

“Oyeyemi, therefore, calls for caution among the motoring public while the bridge is being fixed.

“He has also ordered strict traffic surveillance by operatives of the corps at the bridge head to avert any mishap,’’ he said. (NAN)