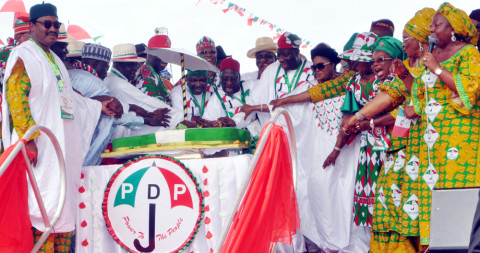 The Thursday ruling by Justice Okon Abang which also affirmed the Ali Modu Sheriff-faction as the authentic head of the opposition followed the former Borno State Governor’s (sheriff) application on July 4, 2016 seeking for an interlocutory injunction to stop the convention and recognized him as the valid PDP National Chairman.

The embattled Sheriff in the application contended that given the Constitution of the PDP, his tenure of office extends till 2018.

The Sheriff-led PDP in addition prayed the court to order final stop to all moves, and declare attempts by the rival faction led by former Kaduna State Governor Ahmed Makarfi, calculated at removing; replacing him or conduct fresh elections into the National EXCO offices as unconstitutional, null and void.

The Makarfi-led faction National Convention was originally scheduled to hold on Wednesday, August 17 2016.

It would be recalled that the recent parley between the two strong factions at the Party’s National office in Abuja, failed to yield good result as the Sheriff’s faction maintained that his rival led-interim EXCO be dissolved, so as to pave the way for his faction to conduct the aborted National meeting.