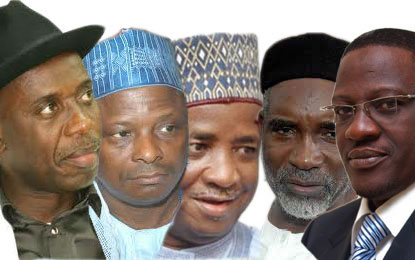 A Federal High Court in Abuja on Tuesday adjourned indefinitely a suit filed by the Peoples Democratic Party seeking an order directing some governors of the All Progressives Party to vacate their seats.

The PDP wants the court order the removal of the governors on the account of their defection from the party which sponsored them into office to the APC before the expiration of their terms.

But Justice Gabriel Kolawole on Tuesday adjourned the matter sine die (indefinitely) on the grounds that the court processes were not properly served on the defendants.

The court in a ruling on Tuesday set aside the earlier service on the governors through APC’s new office at 0, Blantyre Street, Abuja.

Justice Kolawole held that the PDP fell into the trap set by the governors which enabled them to justifiably claim that they were not properly served.

The judge said, “The plaintiff (the PDP) should repackage itself and do the needful to get the defendants properly served.

“I uphold the application of the defendants seeking the setting aside of the purported service, and striking out the motion on notice.”

The governors had challenged the competence of the service on them through the new APC office at 14, Blantyre Street, Wuse II, Abuja.

They had urged the court to declare the service null and void because the said address was not embedded in the ex parte order which directed the court bailiff to serve them through substituted means.

Following the court order obtained on December 13, 2013, directing that the governors be served through the APC office in Abuja, the bailiff had taken the processes to 6, Bissau Street, Wuse II (the old address of the APC).

But on getting to Bisau Street, the bailiff discovered that the APC had vacated the office and had relocated to 40, Blantyre Street, Wuse II, Abuja, where he then served the processes.

But the governors refused service, arguing that it was not in conformity with the order of court. They then filed an application urging the court to set aside the order of December 13, 2013.

The PDP, through its counsel, Alex Iziyon (SAN), subsequently filed another motion on notice dated March 20, 2014, seeking an order allowing it to serve the governors through their state’s liaison offices in Abuja.

But in his ruling on Tuesday, the judge said the latest motion on notice constituted an abuse of court process having been filed when the ex parte order made in that respect on December 13, 2013 had not been set aside.

The judge said the PDP “could have asked that the ex parte order made on December 13, 2013 which ordered for substituted service be varied to accommodate the new office of APC or where the governors could be reached, probably their state liaison offices.”

“The plaintiff’s motion on notice dated March 20, 2014 seeking an order for leave of court granting substituted service on any senior adult in the liaison offices of the various states is an admission that the service effected on the defendants is logically incongruous and defective,” the judge said.

Before adjourning sine die, Justice Kolawole asked PDP to formally write the court and attach the evidence of proper service of court processes on the defendants before the court entertain the suit.