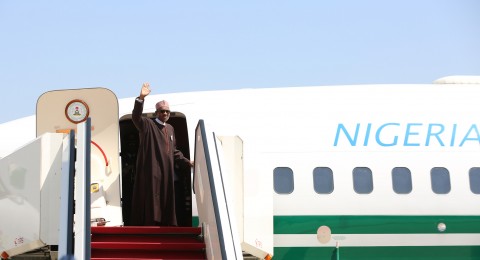 ABUJA, NIGERIA (AFRICAN EXAMINER) – A Federal High Court sitting in Abuja has struck out the suit, requesting President Muhammadu Buhari and the Central Bank of Nigeria CBN to provide details on amount spent on Buhari’s treatment while on medical vacation in London last year.

The suit, marked FHC/ABJ/CS/1142/2017 was filed by the Civil Society Group, Advocacy for Societal Rights Advancement and Development Initiative, acting under the provision of Freedom of Information FoI Act.

The group’s legal action followed the CBN failure to yield to its demands, with respect to how much was spent on the treatment and other costs incurred during President’s stay in the United Kingdom, UK.

The organization is demanding the cost of Presidential aircraft and crew for number of days they spent at the Stansted Airport in London.

Justice John Tsoho in his ruling Tuesday held that since the information sought was personal – the President’s consent must be sought prior to such disclosure.

In addition, the judge ruled that an elected person like Buhari, was exempted by Section 14(1) (b) of the FoI Act, 2011.

Justice Tsoho similarly held that the CBN and its Governor, Mr. Godwin Emefiele, could not be held liable for not disclosing the information, having referred the group’s request dated October 19, 2017, to the Office of the Chief of Staff COS to Mr. President.

He ruled that the plaintiff ought to have followed up on the information with the COS Office, yet, failed in this regard, thus in the end, deprived itself of a definite answer to its questions from the government.

Justice Tsoho equally struck out the‎ name of the Attorney-General of the Federation and Minister of Justice, Mr. Abubakar Malami SAN, as the third defendant on the ground that there was ‘’no reasonable cause of action” made against him.

The plaintiff’s prayer for damages was also dismissed by the judge.