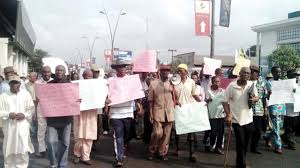 (AFRICAN EXAMINER) – Scores of pensioners in Enugu State, South-East Nigeria have taken to the streets to protest alleged corruption, and other ill actions by the leadership of their union, just as they passed a vote of no-confidence on them.

The senior citizens, as they are fondly called numbering over five thousand had  converged at their secretariat located within the Old Eastern Nigeria House of Assembly, at the Government Reservation Area, GRA Enugu before moving to the streets.

They unanimously passed the motion for a vote of no confidence against the executive committee members of the Nigeria Union of Pensioners, NUP, Enugu State Council.

The aggrieved retired workers, cited embezzlement, selfish interest, lawlessness by the exco led by Mr. Damian Udeani and Mr. John Nebo, as some of the reasons for their protest.

African Examiner reports that they had during the peaceful protest, displaced placards with different inscriptions, such as: “render your financial statement of account for the past 12 years; you collect and enjoy our check-off dues without commensurate service;

“you have deceived pensioners enough; we need a change of leadership.”

Moving motion for the vote of no confidence earlier, which was unanimously carried by all the retired workers, Comrade Douglas Edeh and Comrade, J.O.C Eheh, stated that “it is only a weak, insecure, paranoid, wicked, heartless, ignorant and lawless leaders like we have in NUP, Enugu State, that will invite thugs to attack pensioners who voice their minds on matters relating to their welfare.

“We had for quite some time now watched patiently the activities of these officers and the style of their leadership and come to the conclusion that most of them exhibit wretched leadership acumen.”

The protesting retirees, equally accused the its leadership of flagrant abuse of the union’s constitution as well as lack of transparency and accounting.

They alleged that “they have refused to render financial statement of account for the past 12 years.

“They have also refused to be calling meetings; they only summon meetings when elections are due, to carry out campaign for their re-election/selection and during Christmas periods to receive the Christmas cash gifts from the State Government for misappropriation.

“In view of the above, we the pensioners in Enugu State unanimously move a vote of no confidence on the officers at the State Council and the other 3 branches of the Union at Enugu main, Abakpa and Nsukka sub-treasury.”

The protesters, however, called on the national leadership of the NUP as a matter of urgency set up an 8-man caretaker committee for the Enugu State Council and each of the three sub-treasury to run their affairs pending when fresh elections are held.

They also called on the Accountant- General of Enugu State to put on hold the check-off dues in favour of the Enugu main sub-treasury, Abakpa and Nsukka zones.

But when contacted, the embattled State Chairman, Mr. Damian Udeani, dismissed the action, saying the protesters lacked the legitimate power to sack him from office.

He also denied all the allegations levelled against him by the protesters.