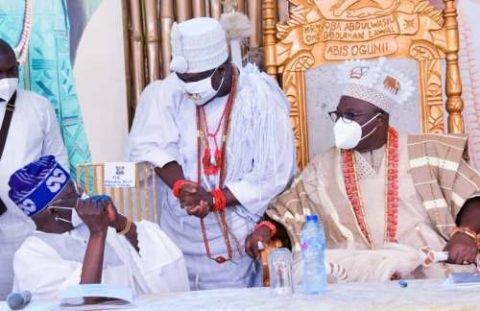 (AFRICAN EXAMINER) – As a video emerged on social media on Thursday which showed the National Leader of the APC, Bola Tinubu, seating down to greet the  Ooni of Ife, Oba Adeyeye Enitan Ogunwusi, Ojaja II, some Nigerians have taken to Twitter to express their opinions on the issue.

Prominent among them is the spokesman for Pan-Yoruba Group, Afenifere, Yinka Odumakin, who disclosed that it was not proper for Tinubu to seat down and greet the king.

Odumakin said: “We are still Yoruba people. With due respect to our royal fathers, we should not say because we are in a modern age, we should not give the proper respect that we give to our oba.

“You saw the time former President Obasanjo prostrated before the Ooni.

Also, the former Aviation Minister, Femi Fani –kayoed, writes: “That the Asiwaju of Bourdillon refused to stand up to greet the Ooni of Ife speaks volumes.

This was not only deeply insulting to every Ife & indeed son & daughter of Odua but it is also a crying shame. Would a northern pol. leader refuses to stand up for his traditional ruler?”

African Examiner captures the views of others below:

Truth is bitter@fasasiAkeem7 writes: “The present ooni has been disgracing & desecrating that stool if he respect himself 1000 of tinubu can’t dare him. But tinubu arrogant this day is becoming unbecoming.”

Akorede@Akorede04 writes: “I think u need to work on ur sense of reasoning. Ooni is the first traditional ruler in Yoruba land. Tinubu refusing to stand up to greet ooni is a total disrespect to the whole of Yoruba land. Even high rank Kings stand to greet ooni. Forget sentiment, Tinubu is a disgrace on this.”

Prince Adedoyin Alatishe@AAAlatishe writes: “Yoruba obas need to do better and restore respect to the royal institution. Saheed elegushi has no right to be seated while Ooni of ife was making his way to the high table. Same as Asiwaju and the new oniru. Its very wrong and disrespectful.”

akinrinsola@Z__Chameleon writes: “Tinubu is too old to be modern day anything.”

Ayekooto@DeeOneAyekooto writes: “TINUBU d Man who supported GMB without receiving ANY PERSONAL BENEFIT. Not appointment, not contracts, not oil, not even National Honours. U may say he nominated ppl into government, how many politicians do that, they’ll rather be there personally, abi no be this game of treachery?”

J Ndubueze Ejiofor@joeejio4 writes: “So u r expecting Tinubu to prostrate to him like Davido so what? Let me tell you live and direct oni of ife did not stand up to great Tinubu. He entered in the middle of the program and he was going to have his seat beside Tinubu. Don’t be mislead my FFK article please.”

LEGENDARY PAPASAM@FirstPapasam writes: “What was the Ooni supposed to do to show he has problems with it? The Ooni was just wiser and more mature at the said event. This your comment is wrong.”

Felixaeome@felixaeome writes: “The picture below is utter disrespect to the king nd ife kingdom plus yoruba nation. Awolowo never sat down when a king was upstanding. Can asiwaju do same to Awujale or Oba of Benin? Ooni sef stop going uppandan.”