Ebola, Boko Haram and Other Sources of Societal Terrorism

Terrorism simply refers to any act of violence, intimidation, terror campaign from any source, bombing and all similar insurgencies. To that effect we can assert that Nigeria has got her plates very full of any class of violence right now in the society. Boko Haram has monopolized the field of violence since 2009 and now pitching its tents deep in Sambisa Forest, where it is keeping whatever they steal forcefully from innocent citizens, to continue to terrorize their victims and the entire community. Despite the scale of brutality and barbaric acts on human lives, and the frequency at which it chooses to visit the community with all manners of wickedness and violence, Boko Haram is no longer the only source of violence either in Nigeria or in West Africa. In fact Boko Haram cannot be said to have been successful in its violent campaign to wrestle power and truncate the current regime. It has however been successful enough to have stolen unknown number of the Chibok School girls, create insurgencies and bombing at various sites in Northern Nigeria, create panics all over the states and possibly complicating future elections in Nigeria. Problems like this not only hurt entire society but have been destroying individuals. They are not just social or political problems but moral and spiritual ones as well. Even though we find no consolation word to charm away the wicked spirit of this melancholy from our community we have resolved that their wickedness cannot prostrate us. 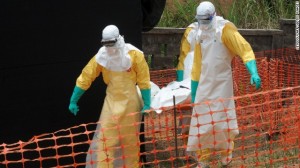 Ebola epidemic has joined the race by visiting West Africa with an underlying degree of indescribable violence whereby members of Boko Haram may themselves be the new victims and would have to bow to the virus. This is the fear of the western world and all modern militaries that Ebola virus could become a weapon of war. Any armed forces or militant groups can easily obtain Ebola virus and wrongly use it on known opponents and other active operatives. Ebola is the name of a river in Congo where the virus was first discovered in 1977 but it is no longer a peaceful flowing river in West Africa. By having a direct contact with the blood or fluid of a victim, eating animal flesh that is carrying the virus, and various other direct or indirect contacts the virus may be contacted. The terror it brings includes terror of fear of the mind, suspicion of each other and breakdown of common mutual trust.

This fear has gone abroad with negative stigma and name calling on West African countries where the virus has been killing its victims. Therefore Ebola may affect international and bilateral relations negatively, especially between the developed and less developed communities of the world. It is bad enough to quarantine a few affected Ebola victims but we should not extend same to entire countries in the region traveling abroad whose status on Ebola is yet to be classified. Already the developed world is believing that their advancement has come as a result of their overwhelming ability, hard work, expertise and wisdom while they consider that the less developed environments in Africa must have been due to lack of African intelligence. This may push the western powers into treating any visitor from Ebola infected West African countries into their countries with their usual contempt and disdain. This will also be violence of the scale of slavery and ill treatment of humanity. The issue is made complex by the fact that a scientific breakthrough we are searching for to contain Ebola, both material and man, may come from this same western world.

The domestic violence from Ebola, and its related components, is the wrong campaign being chucked out to the public by individuals and organizations that are much less informed either about Ebola, its mode of spread or methods of its management. Giving the public the wrong set of information on any issue, be they on religion, health, economic or any others will be regarded as violence against the innocent public. We need to know the truth and not anything else. A large percentage of Nigeria system is currently being wrongly driving by rumours, hearsays, people who simply wish to catch on the ignorance of the people and non-data based decision making processes. This is happening largely because the government presence is absent on the ground while information organs like NTA, media houses, collect and disseminate the information from the network rather than on primary sources. We must collectively reject this henceforth and by empowering the law enforcers that those who would continue to live on mischief by misinforming the public to face the necessary prosecution.

Recently I met with some neighbours where I live in Ilorin, Kwara State Nigeria. Their complaint was the regular noises coming out from the mega amplifiers hanging close to their residential windows. These individuals are themselves believers of the some faiths though a different sect and worshiping elsewhere. Their fear was to avoid any misunderstanding that may crop up from the public if they should attack a group of fewer than 50 people who regularly worship nearby but choosing to attach mega amplifiers that could cover half of the big and ever increasing Ilorin city. We will notice that nearly all worship houses in Nigeria infringe on the rights of their neighbours by extending their unsolicited broadcasts beyond their domain and doing so forcefully. These neighbours are suffering in deep silence and praying always against those who frequently violate their perceived rights. In Ilorin, the capital city of the State of Harmony, we are all working together to avoid confrontation amongst believers of all faiths.

The mental violence of unemployment or the economy that cannot engage most of the locally available workforce, where an individual has all the bills to settle but no means to work and pay for the bills makes us believe that employment is human right issue. These are the people the system has trained, some have been forced to do a compulsory one year national service after graduation then throw them to a market where they cannot be gainfully employed. That is, a system also fuels what can be termed as induced violence to the society. Of course induced violence is greater than just unemployment as it consists of any action or inaction by individuals, organizations, political parties, any arm of government, resulting in planned violence and counter violence in the society. This may involve rumour peddlers, falsehood fabricators in society and also any source that is capable to generation commotion amongst the people. A government may involve itself in induced violence when it may have lost an election or when it wants to create a confused state and making people to believe that the violence is caused by the opposition parties, and vice versa. Government officers that have never opened their own party manifestoes let alone understand and obey their own set rules or government officers that consider the national constitution as something to be satisfied for ceremonial occasions only or when it is most convenient are likely to be agents of confusion and violence.