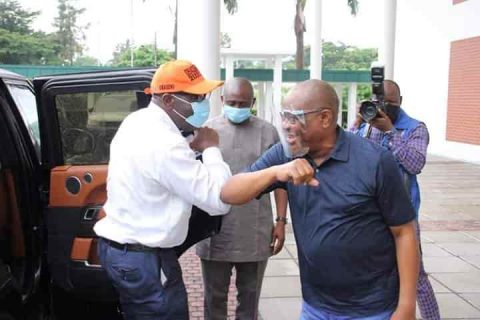 Although, as at the time of this reports,  it is not clear what the meeting is all about but it appears it is not unconnected with the rumor that the Edo State governor intends to run on the platform of the PDP in the forthcoming governorship election.

Recall that his party, All Progressives Congress, APC disqualified him and 2 other aspirants from the party’s gubernatorial primary slated for June 22, 2020.

The Chairman of the Screening committee, Prof Jonathan Ayuba, stated that the disqualification was based on the governor’s controversial certificate and age discrepancies.

Similarly, the party’s National Working Committee (NWC) led by its National Chairman, Mr Adams Oshiomhole, has approved the reports of its screening and appeal committees that disqualified Mr Obaseki.

As a result of this development, it is believed that Governor Obaseki may decamp and run under the platform of the People’s Democratic Party (PDP) hence the visit to Governor Nyesome Wike of Rivers state, who is a strong stalwart of the party.