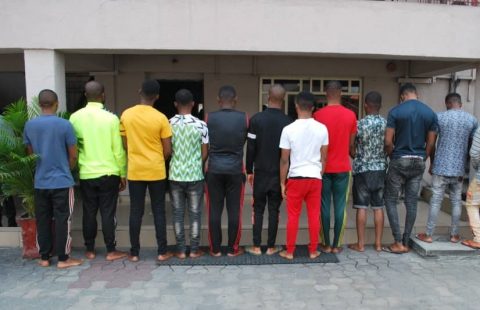 According to the Nigeria’s anti-graft agency, the suspects are, Samuel Chimaobi, Alex Udodiri, Ejike Chikamso, Nwanchukwu Michael and Obialor Samson.

The organization’s Acting Head, Media and Publicity, Mr.  Tony Orilade, disclosed this to African Examiner on Tuesday in Enugu via a press statement

The EFCC Spokesman, added that “they are among 23 persons apprehended in an early morning operation by the Commission on March 12, 2020.

“However, after careful screening, eleven suspects were released, preliminary investigation has established the involvement of the remaining 12 suspects in various internet scams ranging from love scam, Bitcoin fraud, identity theft, trading scam, among others.

He said “Items recovered from the suspects include 11 laptops, five android phones, four Nokia phones, one Techno phone, three WIFI, two modems and a wristwatch. The suspects will soon be arraigned in court.” Orilade hinted.