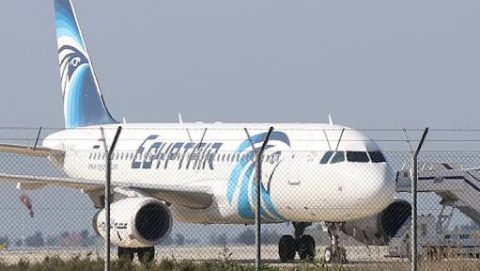 Egypt found wreckage including seats and luggage Friday from the EgyptAir plane that crashed in the Mediterranean, as investigators tried to unravel the mystery of why it swerved and plummeted into the sea.

Search teams spotted personal belongings of passengers and parts of the Airbus A320 about 290 kilometres (180 miles) north of Egypt’s coastal city of Alexandria, the military said.

The country’s aviation minister has said a “terrorist attack” was a more likely cause than technical failure for the plane’s disappearance on a flight from Paris to Cairo with 66 people on board.

But French Foreign Minister Jean-Marc Ayrault said there was “absolutely no indication” of why the plane came down.

“We’re looking at all possibilities, but none is being favoured over the others,” he said.

The tragedy raised fears of a repeat of the bombing of a Russian passenger jet by the Islamic State jihadist group over Egypt last October that killed all 224 people on board.

In Cairo, French and Airbus investigators were to meet their Egyptian counterparts to lay the groundwork for their probe.

A French patrol boat carrying equipment capable of tracking the plane’s black boxes was due to arrive Sunday or Monday in the area where the plane is thought to have crashed, the French navy said.

It came as the French embassy in Cairo said the black boxes can emit signals for only up to four to five weeks.

Relatives of some of the passengers and crew met EgyptAir officials and later gathered at a hotel near Cairo airport to exchange information.

“They haven’t died yet. No one knows. We’re asking for God’s mercy,” said a woman in her 50s whose daughter had been on board.

The plane disappeared between the Greek island of Karpathos and the Egyptian coast in the early hours of Thursday, without its crew sending a distress signal.

A multi-national operation involving aircraft and ships has been launched to find the plane.

Kammenos said Egypt had told Greece that search teams had found “a body part, two seats and one or more items of luggage” north of Alexandria.

The European Space Agency said one of its satellites had on Thursday spotted an oil slick about 40 kilometres southeast of the plane’s last known location.

French President Francois Hollande had said that it was clear the plane had crashed, and authorities in both Paris and Cairo opened investigations.

Fifteen French citizens, a Briton and two Canadians were among 26 foreigners on the plane.

One of the Canadians was Saskatoon-born mother of three Marwa Hamdy who was returning home to Cairo after visiting relatives in Paris, a friend tweeted.

IS jihadists have been waging a deadly insurgency against Egyptian security forces and have claimed attacks in France and Egypt.

In October, an Airbus A321 operated by Russia’s Metrojet broke up over the Sinai desert after taking off from the Egyptian resort of Sharm El-Sheikh, killing all on board in an attack that IS claimed.

Greek civil aviation chief Constantinos Litzerakos said the pilot had mentioned no problem in his last communication before the plane disappeared, and the flight had not deviated from its course.

“The flight controllers contacted the pilot at a height of 37,000 feet (near Athens) …he did not mention a problem,” he said.

Neither the Greek coastguard nor the navy could confirm reports a passing ship had seen “a ball of fire in the sky”.

Litzerakos said that if there had been an explosion, any debris would have been scattered across a wide area.

The passengers also included two Iraqis and one citizen from each of Algeria, Belgium, Chad, Portugal, Saudi Arabia and Sudan, as well as 30 Egyptians, the airline said. They included a boy and two babies.

Seven crew members and three security personnel were also on board.

In October, foreign governments issued travel warnings for Egypt and demanded a review of security at its airports after IS said it downed the Russian airliner with a bomb concealed in a soda can that had been smuggled into the hold.