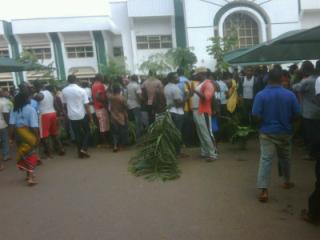 Administrative activities were Monday paralyzed at the University of Nigeria Nsukka UNN, as two of its host communities, Owere-Eze Orba and Ajonu Obukpa, barricaded all roads leading to the administrative block during a protest to the institution. 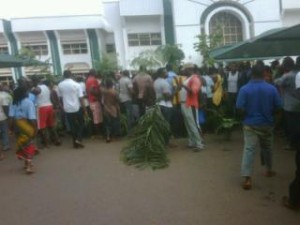 They were protesting the disconnection of their electricity by the university.

The protesters, numbering about 3,000, comprising youths, women, and men made it impossible for any visitor or staff to gain entrance to the admin- block housing the Vice Chancellor VC’s office for about seven hours.

Speaking with newsmen the youth Leader, Mr Ndukwe Agbo, said for the past eight months the university disconnected their light and every attempt by the community for its reconnection ended on empty promises.

Hear him: “For over eight months we have been in darkness, the university disconnected us on the excuse that, with our light the university community would be experiencing low voltage, saying we should go and buy our own transformers.”

“We have bought our transformers but reconnecting us becomes a problem,“ he said

“This problem started since Prof. Bartho Okolo became VC, during other chancellors regime our electricity was never disconnected.

“We have decided to sleep here unless the university immediately reconnects our electricity, we can not continue to stay in darkness” he declared

Also speaking, the women leader, Mrs Nwachukwu Eze, said it is unfortunate that the university had refused to keep the agreement it entered with host communities.

“I don not know what we have done to present VC that he is unleashing wickedness on the communities that donated land freely to the university,

“We will stay here until the university tells us when to reconnect our light.

“The university has failed in all the issues contained in the pact they signed with us, no water, no employment to our people, “she said.

Efforts by the deputy Vice-Chancellor Administration, Prof Malachy Okwueze, to address the angry protesters failed, as they continued chanting ‘we don want any talk, go and reconnected the light.

Addressing journalists after meeting with UNN management in a close door meeting that lasted about three hours, Abonyi, described the situation as unfortunate though, blamed it on misinformation.

He said the VC was misinformed by the director of works, Mr Tochukwu Osadebe of the university.

“I believe the problem is that the VC was misinformed by the university director of works, who told him that re-connecting the communities will result in low voltage.

The Udenu council boss however, promised to contact the state government on the issue, stressing that the state rural electricity Agency might be involved in connecting the transformers of the communities, if UNN finally failed to reconnect it.

“We have discussed with the management and the Udenu LG council would ensure the problem is solved. He assured.

“To me VC is not the problem, but the director of works appear to be misinforming him,” he stated.

African Examiner reports that though, the protesters later went home, but at the time of filing this reports major roads in the UNN campus still remained blocked with heavy logs and iron objects.