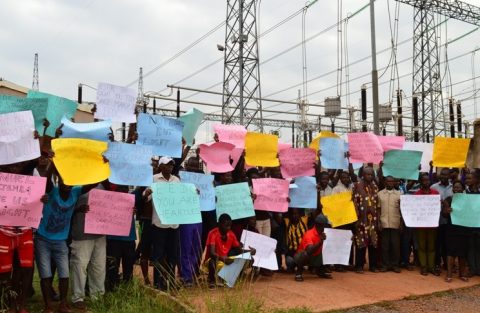 (AFRICAN EXAMINER) – The people of Ugwuaji, a satellite community in Enugu South Council area of Enugu state, where one of the federal government’s multi- billion naira power transmission substation is situated have staged a peaceful protest against alleged four months blackout as well as outrageous  bills by the Enugu Electricity Distribution Company (EEDC).

They called on the Federal, State, and National Assembly NASS to intervene  and save them from the agony, which they said is affecting the socio-economic development of the locality.

The people who displayed several placards with various inscriptions, lamented that despite the community donating free of charge, over 25 hectares of land upon which the Federal Government built the multi-billion naira transmission sub-station that serves parts of Enugu, including the Government House, and other states like Rivers, Cross River and Kogi, they have been poorly treated in terms of electricity provision and billing system.

Addressing newsmen during the protest, Spokesmen of the community including, Hon. Chime Ifeanyichukwu Ede, said the people paid between 4 to 5 million naira per transformer, and that they have about 8 transformers in the community.

Ede, who is also the Treasurer of the Community ‘s Town union, lamented that EEDC disconnected them from power supply about four months ago because of inability to pay bills running into more than N40 million.

He particularly  appealed to the Federal Government through the  Minister of Works, Power and Housing, Babatunde Raji Fashola to  intervene in the interest of peace by prevailing on EEDC to revert to the old bill of N200, 000 per transformer or at least grant them 10-year waiver since the transmission sub-station is situated in their community land which they donated free of charge for the project.

The Community equally called on Fashola to prevail on the contractors handling the road project that passed through the community/the project site to return to site and expedite work in order to save the area from current agony they pass through on the road.

Ede, explained that the construction of the sprawling transmission power sub-station was started by Prof. Barth Nnaji as Minister of Power,
under the Administration of former President Godluck Jonathan, and completed and inaugurated about a year ago by the current President Muhammadu Buhari’s administration.

He noted that during one of his inspection visits to the area, Fashola awarded the road contract which runs from the community through Nkanu East local government area up to Ebonyi state, but regretted that the road construction appeared to have been abandoned.

“Ugwuaji people are here to demonstrate our grievances over the high bill of EEDC. Ugwuaji people in their usual magnanimity gave their land for the overriding public interest for the building of transmitting station.

“So it is appalling and disheartening that after all these kind gestures we are being re-paid by charging Ugwuaji people over N4 million per transformer and we have approximately eight transformers in existence.”

However, efforts to get reaction of the Public Relation Officer of EEDC, Enugu, Mr. Emeka Eze hit the rock, as he did not respond to phone calls put across his mobile phone.