Enugu Community to Honour Indigenes Of  90-Years Old and Above 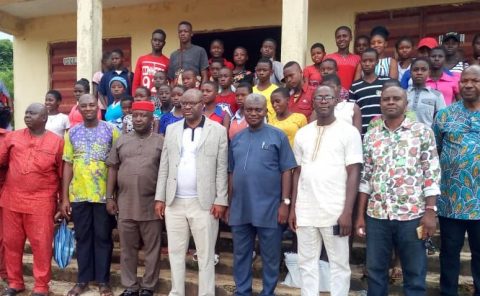 (AFRICAN EXAMINER) – As part of efforts to recognize longevity, Amokwe ancient kingdom in Udi council  Area of Enugu State, South- East Nigeria, says plans are afoot by the community  to recognize its indigenes that have clocked 90 years and above, just as it empowered less privileged women and students.

The proposed ceremony being packaged by  Amokwe Development Foundation(ADF), a global association made up of  prominent personalities  and patriotic citizens of the area residing in parts of the world, will take place in December 2019.

Chairman, Education and Empowerment Committed of ADF, Mr. John Kennedy Chime, disclosed this to newsmen weekend during the 2019 annual Education and Human Capital Empowerment Programme for indigent citizens of the community held at Amokwe Town Hall.

He stated that one of the objectives of the planned recognition and award for the aged men and women is to encourage the elders “to also tell us the history of Amokwe, Umuneke, Udi, Enugu State and anything they know about Nigeria and the world.

According to him, every Amokwe citizen residing in Nigeria and other parts of the world “are expected to come back home for these recognition of citizens of the town that are ninety years and above which will take place in December this year.

He said aside the Prizes that will be given to the awardees, the people will use the opportunity to encourage the elders to tell them the younger ones how they came to be where they are.

“We are trying to bring people together to encourage Peace, unity and oneness. Our children and grandchildren are coming back from all over the world to know what our home is like.

Chime explained that the aim of the  community’s education and empowerment, infrastructural capital human development, as well as medical services programme which began last year, was to help alleviate the suffering of  the people of Amokwe people especially the indigent ones.

The chairman, also  hinted  that ADF supports each of the less privileged  indigent market women that it selected from the four autonomous communities that makes up Amokwe with about 20,000  and 30,000 naira  interest free loans to trade with, stating that the foundation gives back the money to those that return the loan within one year and add others to the scheme.

Chime further revealed that in the education sector, ADF conducts internal exams for indigent Junior Secondary JSS and Senior Secondary Schools SSS  students taking their terminal exams, after which it picks about 5 people from  each of the four autonomous communities and offer  them some financial support to enhance their education pursuit .

“Amokwe Development  Foundation is made up of members around the world from the four autonomous communities namely Uzo Enugu, Uwani, Etiti and Orji.

40 women and 16 students were empowered from a group of about 120 . The program is in phases and It’s expected that others will benefit soonest.